SNEAK PEEK: The Legend of the Ghost Train by C.J. Baty 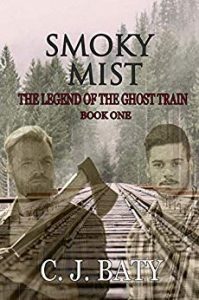 THE LEGEND OF THE GHOST TRAIN SMOKEY MOUNTAIN MIST – Book One – C.J. Baty

Jesse Lawson was never afraid of the strange and unusual dreams he had. But lately, they were becoming darker leaving him with a need to discover why he was having them. He believed he would find answers at the site of logging camps in The Great Smoky Mountains. His great grandfather had lived and died there, and Jesse was sure it was Jackson Douglas haunting him.

Carter Thompson never knew his great great uncle George Thompson, but he inherited his land, home, and money. George had come here to America to find work in the lumber camps. Meeting Jesse Lawson was about to turn his world upside down. Jesse’s dreams somehow involved Carter, and the more they searched the closer they became.

George left journals that could clear up many mysteries, including Jackson Douglas’s death. Now it seemed that something was trying to destroy Carter and Jesse’s growing attraction to each other. Whoever it is will stop at nothing to keep them apart, even if they have to repeat the past to do it.

There will be three books in this series. Each is a standalone and can be read in any order. Each has a HEA.

The Legend of the Ghost Train

Today, people say that on a quiet night in the mountains of Virginia, Tennessee, and Kentucky, you can hear the far off shriek of a locomotive whistle and the rumble of the train’s cars as they clamor across the tracks. The legend claims the train moves through the valleys and mountains searching for lost souls that need a lift to the other side.

In the early Twentieth Century, railroads were not only a way to transport people, they also carried all types of goods across the country. Lumber from the forests of Tennessee, coal from the mines of Kentucky, and tobacco from the fields of Virginia were just a few of the industries that depended heavily on the railroad system. Even the Vanderbilt’s built a train system to carry the products needed to construct the great Biltmore Estate.

The Legend of the Ghost Train series will carry you off to a simpler time before WWII and the Great Depression. It’s about the love between two men that wasn’t spoken of and ghosts of past loves that still linger in the mountains. Some haunt the living looking for a loved one. Some want revenge for wrong doings. And, others are evil and will stop at nothing to repeat the past and kill again.

“What the hell is happening to the animals in this park?” Carter cursed in a rough voice. “Don’t move.”

Jesse felt Carter move away from his back. His knees started to tremble, and it was getting hard to breathe. The coyote took a step forward, then another. One more and his paws would be on the bottom rung leading up to the setoff house. Jesse was shaking uncontrollably at this point and he was sure he was going to pass out. The coyote let out a gnarled growl and lunged. A gun shot rang out and Jesse collapsed in the open door of the setoff house.

When he woke up, he was laying on the bed in Carter’s cabin. He could hear muffled voices coming from outside. Raising from the bed, he felt dizzy, but it quickly dissipated. He walked to the front door and stepped out on the porch. The same police officer who’d come to the hotel was talking to Carter and a game warden vehicle was parked in the yard. Two men were putting what Jesse assumed was the dead coyote in the back of the vehicle. Carter came to his side immediately.

“You feeling okay?” he asked.

“A little shaky and pretty stupid. I fainted,” Jesse said rubbing his temples. “I’ve never done that in my life.”

“Well, you’ve never been almost attacked by a rabid coyote either,” Carter said putting a comforting arm around Jesse’s shoulder. It felt good.

“Yes,” the police officer said. “Bill Browncoate. I don’t know if you remember me from the other day at the motel.”

“I do,” Jesse offered the policeman his hand. They shook. Jesse didn’t miss that Browncoate looked at Carter’s arm around him.

“According to the game warden the animal showed all the signs. You two were damned lucky. It’s a good thing that old rifle was loaded,” he said giving Carter a quick glance.

You can purchase THE LEGEND OF THE GHOST TRAIN at: 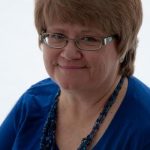 C.J. loves a good mystery, hot sexy guys, the mountains, and a happily ever after. When she decided to try her hand in the book world, it only made sense to combine those things. She firmly believes that love is love in all of it’s shapes and forms. Her books contain broken spirits that need to be mended and a mystery, often a murder, which needs to be solved, so those spirits can find love. She calls southwest Ohio home, but her heart lives in the hills of Tennessee.

To learn more at CJ and her books:

Jocie McKadehttps://www.jociemckade.com/
Her fiction writing has received the Author / Ambassador at Library Journal Self-e Authors, Winner Queen of the West Reader Favorite Award, Amazon Bestseller - Historical, Double finalist in the Next Generation Indie Book Awards in the Mystery and Humorous Categories. Writing humorous cozy mysteries and romantic comedy, Jocie can find humor in most everything, even when she shouldn't. She lives in the Midwest on Dust Bunny Farm with her family.
Previous articleBooks that Celebrate Women’s History Month
Next articleFinal Book in a Trilogy of True Paranormal Adventures an Amazon Bestseller!!