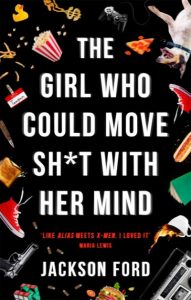 THE GIRL WHO COULD MOVE SH*T WITH HER MIND by Jackson Ford @realjacksonford (who has just revealed his secret identity) is being developed for a TV series by none other than the production company behind the Star Trek TV franchise! See an excerpt from the press release sent out below:

In a competitive situation, rights for the Jackson Ford novel The Girl Who Could Move Sh*t with her Mind have been optioned by Secret Hideout, the CBS Television Studios production company behind the Star Trek television franchise, who plan to develop it for television. The deal was brokered by Emily Hayward Whitlock at the Artists Partnership in association with Ed Wilson at Johnson & Alcock.

Described by author Maria Lewis as ‘Alias meets X-Men in a grimy LA setting’ and by the Guardian as a ‘madcap adventure, with some terrific jokes and plenty of tension’ that moves at ‘breakneck speed’, The Girl Who Could Move Sh*t with her Mind tells the story of a woman with telekinetic abilities who works as a secret government operative. It is published worldwide by Orbit UK and Orbit US.

Jackson Ford is a pseudonym for the author Rob Boffard, a South African author currently living in Vancouver. He has previously released four science fiction novels with Orbit under the name Rob Boffard, and was a journalist for over a decade, writing articles for publications and sites including The Guardian, the BBC, Wired Magazine and io9.

Now’s the perfect time to check out THE GIRL WHO COULD MOVE SH*T WITH HER MIND (UK|US|ANZ) if you haven’t done so already. And we’re pleased to say the sequel RANDOM SH*T FLYING THROUGH THE AIR (UK|US|ANZ) is coming this July!

Jocie McKadehttps://www.jociemckade.com/
Her fiction writing has received the Author / Ambassador at Library Journal Self-e Authors, Winner Queen of the West Reader Favorite Award, Amazon Bestseller - Historical, Double finalist in the Next Generation Indie Book Awards in the Mystery and Humorous Categories. Writing humorous cozy mysteries and romantic comedy, Jocie can find humor in most everything, even when she shouldn't. She lives in the Midwest on Dust Bunny Farm with her family.
Previous articleNow Playing Presents: Science Fiction
Next articleHallmark Gives Paperback Books To Little Free Library