Sheltering In With V.S. Holmes 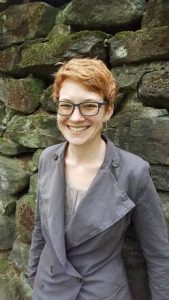 Sheltering In With V.S. Holmes

I hope wherever you are, this finds you well. I’m V, a sci-fi and fantasy author. I’m sheltering in central New England with my spouse, my mom, and our dog, Rory. Since we both work as archaeologists during the warm months, quiet winters at home are part of our routine. We’ve been doing this since December–except around March, when we usually get stir-crazy, instead of heading onto the powerlines and mountainsides, we received a stay-at-home order. Outside everything turned green, the ground thawed, and sun appeared for the first time in weeks. I never thought I’d miss sunburns and bug bites and shovel splinters, but here we are. There’s plenty around the house to tend to, and we’re keeping busy helping my mom with her spring cleaning.

I certainly have more time than I usually do this time of year. Sometimes I use it to write; just as 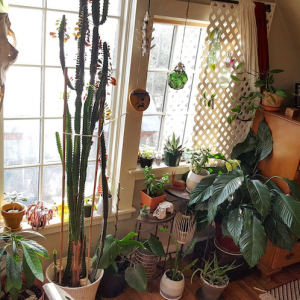 often I spend it staring into space while overwatering my plants. I’m launching a book in the midst of this–the end of a series, actually–and writing two others. I’ve found that while I, of course, hope they meet with as much success as my others did, I’ve been reminded of why I write them in the first place: to show broken heroes, failed quests, and honest villains. Now the world outside is just that much closer to the ones I write. 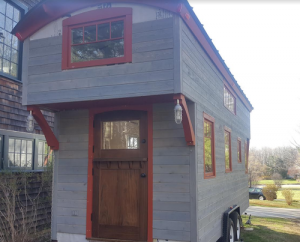 We all need distraction these days. I lost myself in the Witcher show, in the game Journey, in the book Sleepwater Beat, and a few others by S. T. Gibson, O. E. Tearmann, and Angela Breen that I can’t share yet (but am dying to!). My husband hasn’t seen or read Harry Potter, so we’re working through those and watching a grown adult delight in the magic for the first time is pretty fun.

I’ve been thinking over this post for a month, turning over how to convey the hope and certainty I feel against this backdrop of unfamiliar chaos. It’s hard to find a way to describe this other than with a GIF of that cartoon dog in a burning house or a tremulous “It’s weird, eh?”

People are learning, and remembering the sound of their own thoughts. Many are meeting their children and partners in a new way. Communities are pulling close and loving fiercely. My compassion for the days I don’t write, or when I don’t do anything at all, has increased. My certainty in the future has almost disappeared. My faith in humanity is deeper.

I hope you’re weathering this, and I hope your community remains strong, and as always, happy reading.

V. S. Holmes is an international bestselling author. They created the REFORGED series and the NEL BENTLY BOOKS. Smoke and Rain, the first book in their fantasy quartet, won New Apple Literary’s Excellence in Independent Publishing Award in 2015. In addition, they have published short fiction in several anthologies.

When not writing, they work as a contract archaeologist throughout the northeastern U.S. They live in a Tiny House with their spouse, a fellow archaeologist, their not-so-tiny dog, and own too many books for such a small abode. As a disabled and queer human, they work as an advocate and educator for representation in SFF worlds. 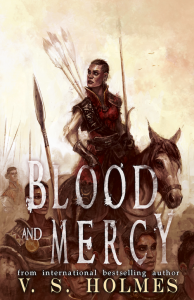 Saving the world may have doomed them all

Keplan reels in the wake of grief and guilt at the blood on his hands. Outside the city walls, however, winter grows fiercer and droughts longer. Alea reforged the fractured world twenty years before–so why is it withering before his eyes? Then, just as he masters being a monarch, a prophet arrives spouting scripture about a One True God. Keplan’s own mother killed the last gods, yet this one matches his description perfectly–and its wrath is about to fall upon Athrolan.

Isolated within the same cold, marble walls as Athrolan’s murderous king, Rih struggles to plot her rebellion leagues away from everything she has ever known. With an unexpected ally, she may have finally found a way to the Mirikin Hetmir–until tragedy strikes. With religious fanatics at their walls, blight in their fields, and a king floundering from addiction, Athrolan spirals out of control.

​Now Rih must choose between a mad king’s life and her own revolution.

Universal Preorder: books2read.com/bloodandmercy (only .99, price goes up to 5.99 after release weekend!)

Jocie McKadehttps://www.jociemckade.com/
Her fiction writing has received the Author / Ambassador at Library Journal Self-e Authors, Winner Queen of the West Reader Favorite Award, Amazon Bestseller - Historical, Double finalist in the Next Generation Indie Book Awards in the Mystery and Humorous Categories. Writing humorous cozy mysteries and romantic comedy, Jocie can find humor in most everything, even when she shouldn't. She lives in the Midwest on Dust Bunny Farm with her family.
Previous articleSheltering In with Jillian Chantal
Next articleThe Top 50 Most Followed Authors on Goodreads