At what point is one a professional dog collector? That is a question we ask of author Sheila English who currently has six dogs, but has had up to nine at one time!

“Well, I pay for my dogs since they are all rescues, does that make me a professional?” laughs English.  “I’ve had dogs growing up. My first love was Lady, a Pitbull mix when I was eight. We had dogs before then, but Lady was special to me. Mine. I loved her fiercely and was lucky enough to have her, her entire life.”

Sheila went on to share, “I’ve always loved dogs. I love cats, too, but dogs are my spirit animal. I started fostering when I moved to Kentucky back in 2005 and continued to foster for Love of Paws and on my own until I moved from there in 2016. At one point I had my seven dogs plus two fosters. You learn how to handle a pack. I have had a pack of dogs for so long and with such success, I have people consult with me when it comes to dog packs.”

What’s the difference between have a couple of dogs and having a “pack?”

“You might have three dogs and you have a pack. You could have four and have four individual dogs. A pack is a mentality of your collected dogs. There’s a hierarchy to it and, as the owner, you are the alpha and you can never forget that. Nor, can you let them forget it. After you there will be a secondary alpha. In my home that alpha is Jill. We’ve had her the longest and she makes sure all the other dogs know to mind her.”

You include a dog in your Adam Frankenstein series, right?

“Yes, Bella. I actually have Bella who is a Harlequin or Merle miniature pinscher also called a MinPin. I got her about eight years ago and she is still my little baby girl. She had distemper as a puppy and nearly died. So, she still gets babied all these years later. Bella is super soft, like a rabbit, she’s a toy hoarder and her best friend is her sister, Rogue.”

“Rogue is a red MinPin. She and Bella are not from the same litter, but they love each other like sisters and are fiercely protective of one another. They also play with each other and hang out. You rarely see one without the other. Rogue was to be a foster, but the second my husband held her we knew she was a keeper. Rogue was unusual since she was a hermaphrodite, meaning she was both male and female. Since this condition was causing her physical pain, we had surgery for her and she is now a girl.”

“Jill is a mix. She’s MinPin, Dachshund and Italian Greyhound. She’s got that sleek greyhound form and never seems to gain weight. She’s bossy and we call her the fun police, but she is also the only dog that actually hugs you. She leans her head over on your chest and puts each paw up. It’s the sweetest thing ever!”

“Hank was a rescue that almost didn’t get rescued. He had been scheduled to be destroyed at a kill shelter. But, someone knew I rescued small dogs and called me in a panic. They held Hank in their arms until I could get there, pay the fee and take him home. He was supposed to be a foster but I could not resist him! He was born with a genetic defect of the eye which is why they were going to destroy him. It is expensive to treat the eye. Luckily, we were able to get him the help he needed and as long as the eye works we will keep it.”

“Hugo was a rescue that my husband got while he was in Kentucky and I had moved to California for a job. We were apart for three years and he missed having a dog. He wanted to adopt an older dog. We knew how many older dogs were turned in or destroyed so we take in the older ones when we can. We want them to have the best of their life for the rest of their life! Hugo had been severely mistreated. But, he bloomed when Ed took him home! He is the oldest dog we have, but he is also the most energetic! We never would’ve thought he would bounce back so well!”

“Last, but not least is Nanette. She is my sister’s dog. While my sister is dealing with moving and other issues in her life I took Nan and  have had her about a year now. We love Nan! She is a very talkative dog. She’s super smart, too. One day my sister may be able to take her back, but we will love her no matter where she ends up!”

Do you have any funny dog stories?

“Too many! I’ve been peed on quite a lot. Not funny at the time though. I had the two MinPins steal my underwear and run out in the front yard playing tug of war with them as the neighbors watched! My dogs are the best entertainment and best teachers I have.  They love unconditionally. I hope to always be the kind of person my dogs think I am.” 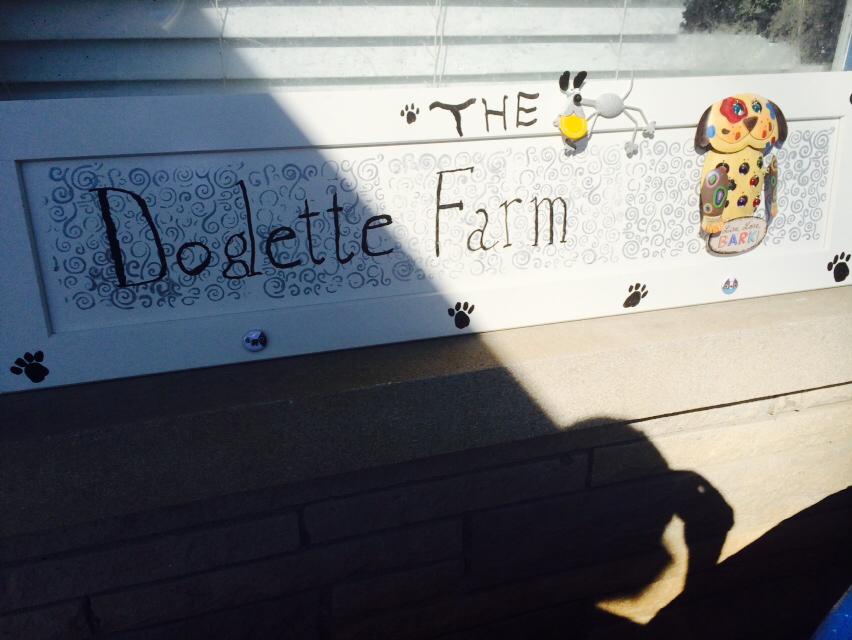