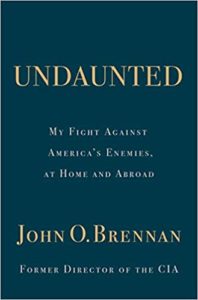 Former CIA Director John Brennan’s memoir, UNDAUNTED: My Fight Against America’s Enemies, at Home and Abroad, will be released on October 6, 2020.

In this brutally honest memoir, Brennan, the son of an Irish immigrant who settled in New Jersey, describes the life that took him from riding a motorcycle and wearing a diamond earring as a young CIA recruit enamored with spy work, to being the most powerful individual in American intelligence. He details his experiences serving under six presidential administrations, three Republicans and three Democrats, and what it’s been like to bear responsibility for some of the nation’s most crucial and polarizing national security decisions.

The powerful and revelatory book begins by describing the events of January 6, 2017, the day Brennan conducted his first and only intelligence briefing for President-elect Donald Trump. Sadly, it was also the day Brennan had to say his final farewell to his father, the man who had taught him the lessons of goodness, integrity, and honor that had shaped the course of an unparalleled career serving his country from within the national security community.

Throughout the book, Brennan pulls back the curtain on the inner workings of the Agency, describing the selfless, patriotic, and invisible work of the women and men involved in national security. He also offers a rare, behind the scenes look at crucial moments in recent US history, including the first Gulf war, the 9/11 terrorist attacks, the Arab Spring, the hunt for Bin Laden, the CIA’s controversial use of enhanced interrogation techniques, the Obama administration’s drone policy, and when he first discovered Russia’s aggressive efforts to undermine U.S. national security and interference in the 2016 election. He also reflects on the CIA’s role in the U.S. government, examining the insularity, arrogance, and myopia that have, at times, undermined its reputation in the eyes of the American people and of members of Congress.

Undaunted: My Fight Against America’s Enemies, at Home and Abroad offers a rare and insightful look at the often obscured world of national security, the intelligence profession, and Washington’s chaotic political environment. What emerges is a portrait of a man striving for integrity; for himself, for the CIA, and for his country.

Mr. Brennan began his government service at the CIA, where he worked from 1980 to 2005 and specialized in Middle Eastern affairs and counterterrorism. He served as CIA’s intelligence briefer to President Clinton, Chief of Staff to then Director of Central Intelligence George Tenet, and Deputy Executive Director. In 2003, he led a multi-agency effort to establish what would become the National Counterterrorism Center, serving as the Center’s first Director in 2004. He retired from CIA in 2005 and worked in the private sector for three years. Mr. Brennan graduated from Fordham University in 1977 with a bachelor’s degree in political science. He studied at the American University in Cairo in 1975-1976. He attended the University of Texas at Austin, earning a master’s degree in government with a concentration in Middle Eastern studies in 1980.

Mr. Brennan currently is a Distinguished Fellow at the Center on National Security at Fordham Law School, a Distinguished Scholar at the University of Texas at Austin, a senior intelligence and national security analyst for NBC, and an advisor to a variety of private sector companies.

Jocie McKadehttps://www.jociemckade.com/
Her fiction writing has received the Author / Ambassador at Library Journal Self-e Authors, Winner Queen of the West Reader Favorite Award, Amazon Bestseller - Historical, Double finalist in the Next Generation Indie Book Awards in the Mystery and Humorous Categories. Writing humorous cozy mysteries and romantic comedy, Jocie can find humor in most everything, even when she shouldn't. She lives in the Midwest on Dust Bunny Farm with her family.
Previous articleSheila’s Book Review: The Renegade Shifters by Cheryl Rush Cowperthwait
Next articleChristine Feehan’s Before the Dark Webisodes