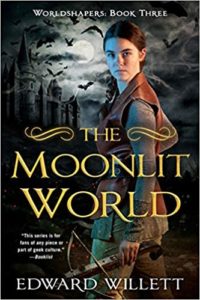 Quick Look: The Moonlit World by Edward Willett Releasing September 15th
Readers can get a look at the first two chapters here!

The first book in the series, Worldshaper, received a starred review in Publishers Weekly and was long-listed for Canada’s prestigious Sunburst Award; Book 2, Master of the World, which just came out in mass-market paperback (it’s also available as a trade paperback, audiobook, or e-book), was also long-listed for the Sunburst Award and short-listed for the Muslims for Peace and Justice Fiction Award at the 2020 Saskatchewan Book Awards.

In The Moonlit World, fresh from their adventures in Master of the World in a world inspired by Jules Verne, Shawna Keys and Karl Yatsar find themselves in a world that mirrors much darker tales. Beneath a full moon that hangs motionless in the sky, they’re forced to flee terrifying creatures that can only be vampires…only to run straight into a pack of werewolves.

As the lycanthropes and undead battle, Karl is spirited away to the castle of the vampire queen. Meanwhile, Shawna finds short-lived refuge in a fortified village, where she learns that something has gone horribly wrong with the world in which she finds herself. Once, werewolves, vampires, and humans lived there harmoniously. Now every group is set against every other, and entire villages are being mysteriously emptied of people.

Somehow, Karl and Shawna must reunite, discover the mysteries of the Shaping of this strange world, and escape it for the next, without being sucked dry, devoured, or—worst of all—turned into creatures of the night themselves.

Praise for The Moonlit World:

“Willett continues to use his innovative worldbuilding to play with genre tropes; there’s a tongue-in-cheek self-awareness to this desolate world that will please fans of dark fiction…entertaining.” – Publishers Weekly

Praise for Master of the World:

“Highly amusing and fun…this series is for fans of any piece or part of geek culture. With the infinite possible worlds in the Labyrinth, every book should be a new, enjoyable adventure.” – Booklist

“Master of the World shows Willett at his world-building best…This page-turner keeps readers of all ages losing track of time as they find themselves pulled further and further into Willett’s tense, challenging, and sometimes funny world.” – the Saskatchewan Book Awards judges

“This novel sets up a fascinating, fluctuating universe with plenty of room for growth for the main characters, and readers will eagerly join their journey.” —Publishers Weekly (Starred Review) 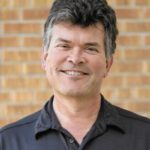 Edward Willett is the award-winning author of more than sixty books of science fiction, fantasy, and non-fiction for readers of all ages. The Moonlit World is his eleventh novel for New York’s DAW Books, one of the world’s major publishers of science fiction and fantasy. He won Canada’s Aurora Award for Best Long-Form Work in English in 2009 for Marseguro (DAW Books), and a Saskatchewan Book Award in 2002 for his young-adult fantasy Spirit Singer, recently re-released by Shadowpaw Press, and has been shortlisted for both awards multiple times. Upcoming works include a young-adult science fiction novel, Star Song, for Shadowpaw Press, and The Tangled Stars, a new space-opera adventure for DAW Books. Willett also hosts The Worldshapers podcast (www.theworldshapers.com), which won the 2019 Aurora Award for Best Fan Related Work, featuring conversations with science fiction and fantasy authors about their creative process; Shapers of Worlds, a Kickstarted anthology featuring some of the bestselling, award-winning authors who were guests on that podcast during the first year, comes out from Shadowpaw Press in e-book format on September 22 and in print on November 14.

Edward is available for interviews, media appearances, speaking engagements, and/or book review requests. Please contact mickey.creativeedge@gmail.com by email or by phone at 403.464.6925

Jocie McKadehttps://www.jociemckade.com/
Her fiction writing has received the Author / Ambassador at Library Journal Self-e Authors, Winner Queen of the West Reader Favorite Award, Amazon Bestseller - Historical, Double finalist in the Next Generation Indie Book Awards in the Mystery and Humorous Categories. Writing humorous cozy mysteries and romantic comedy, Jocie can find humor in most everything, even when she shouldn't. She lives in the Midwest on Dust Bunny Farm with her family.
Previous articleActress & Influencer Jenna Ortega Shares Personal Reflections in New Book
Next articleShadows Across the Moon Serial Novel Chapter 13 and 14