I write this in full recognition that you, the reader, likely will hate me. I mean, I’m a nice enough guy, I think, and I put everything I have into this writing gig, but I’ve been so disgustingly lucky compared to some of my writing compatriots that the fact that I’d be writing about hard knocks is laughable.

My first three books were all picked up and published within months of putting them out into the world. My first book Death Dresses Poorly was acquired by the second publisher I submitted it to. There was no long list of rejections and heartbreak. That was reserved for my other two. I came out of the gate hot and I thought that this thing was so easy.

However, there’s absolutely been knocks along the way, and they have been hard to me, which is all I really have to go on. This is a strange and complicated industry we have involved ourselves in, and everyone’s knocks are different. So, with the grain of salt from someone who has horseshoes where the sun doesn’t shine, I need to talk about haters.

Success is measured in a lot of different ways. For some writers, it’s about becoming a bestseller and gaining recognition in the industry. For the humble hobbyist like myself, it’s about fulfilling a dream and maybe making enough scratch to buy a meal for the family and nothing else. Or for some, it just comes from finishing a project at all and not caring what happens with it, because the journey was the destination all along.

When you reach that level of success, and you will if you have the drive, you will meet the hater.  They’re different for everybody. For me, it has been people who aren’t happy with how I got to where I am. People who insist we all must pay our dues. And people who look down on me because I don’t want to be a full-time author.

I attended my first writer’s conference in August of 2016. While there, and while scared out of my ever-loving mind by all the talent surrounding me, I met more than one person exclaiming that if I wanted to make a serious go at writing I needed to commit completely. “Half-measures are for grade-school students,” one person told me. Did they assume this would inspire me to change my mind? Or walk home with my tail between my legs? Only they know for sure, and I’ve never seen them again to ask them.

Ever since then I’ve had variations of that message come at me. My exclamation that a quiet life in a writer’s nook by a roaring fire was not going to be for me only got louder every time I heard it, because I realized that although the majority of people I meet in the industry are supportive and have similar stories to my own, there will always be those that only see multiple English degrees, or a library of best-selling books, or the accomplishment of their goal to be the only true measure of writing success.

I had never considered that ‘hater’ culture I was so familiar with in other aspects of life would exist in the writing world. This is art. The consumer of art may have a contrary opinion to mine, but the other artists? I don’t come from an art world, or a creative world, or world where the productivity of my frontal cortex is the measure of me as a person. This was a surprise. In the end we all get to create on our own terms.  That’s enough for me. Have your nook and your fire and your old wood desk and glass of wine. Enjoy the fruits of your brain-words, just as I will enjoy mine in a totally different setting.

I set my goals, eye my targets, and take my shot every time. My flippancy isn’t a sign of disrespect. It’s simply who I am as a person. I do take this seriously, or at least as seriously as I want to take it, and at the end of the day I have a story to tell and friends I’ve met along the way. I’m admittedly a people pleaser, and a timid and shy part of me is begging for you to like me, but sometimes oil and water just won’t mix.

I just respect the fact that we are both fluids in a very ridged world. 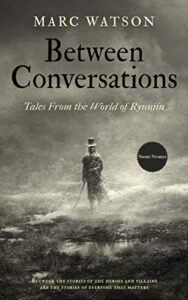 Marc’s latest release is BETWEEN CONVERSATIONS: TALES FROM THE WORLD OF RYUUJIN

In the world of Ryuujin, heroes rise and fall, but there are always stories that slip through the cracks. The tales of the people who shape the years to come. Heroism and betrayal. Conversations between friends and enemies that will change the course of the world.

These are nine stories from a world that is historic, modern, and terrifyingly futuristic. A world where science and magic intertwine, and give birth to the unknown souls who become heroes, and the legends who fade away into history.

From the author of the renowned dark comedy Death Dresses Poorly, and from the world of his hit science-fantasy duology Catching Hell comes a collection of adventure, drama, joy, and terror as we look into the lives of the powerful, the meek, and the people who make the world turn over the course of centuries.

About the author:
Marc Watson is an author of genre fiction of all lengths and styles. He began writing at the age of 15 and continues to be a part-time writing student at Athabasca University. His debut novel Death Dresses Poorly was released in 2017, followed closely by duology Catching Hell: Journey & Destination. His new book Between Conversations: Tales From the World of Ryuujin is available starting September 25th, 2020.

Marc lives in Calgary, Alberta. He is a husband and proud father of two. He is an avid outdoors-man, martial artist, baseball player, poutine aficionado, and lover of all Mexican foods. He can be found at online www.marcwatson.ca, as well as on Facebook at www.facebook.com/marcwroteabook, and on twitter and Instagram at @writewatson.