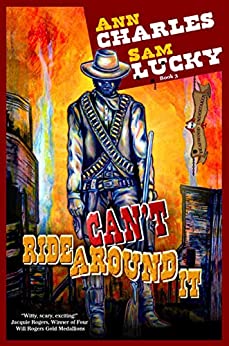 Some things you just can’t ride around …

Jack “Rabbit” Fields knew a good thing when he saw it, whether it was a sound horse, a sure bet, or a pretty sage hen. When it came to locking horns with any curly wolves he ran into along the trail, he tended to shoot first—a notion that had saved his hide more times than he could count. But that was before he came to Deadwood.

Now, someone is stealing freshly dead bodies right out of their graves, and Rabbit and his amigos are on the hunt to figure out who. And more important, why?

Unfortunately, finding the answers to those questions will take plenty of Rabbit’s bullets, and maybe his blood, too. When the shooting stops and the smoke clears, he reckons there will be a whole lot more cold corpses in the Black Hills.

Hold onto your hats and saddle up for another action-filled adventure with the Santa Fe Sidewinders, Clementine, Hank, and the rest of the goldurn Deadwood devils!

Other Books in The Series:

Life At The Coffin Joint

Deadwood (late 1876) … A rowdy and reckless undertaker’s delight. What better place for a killer to blend in?

Enter undertaker Clementine Johanssen, tall and deadly with a hot temper and short fuse, hired to clean up Deadwood’s dead … and the “other” problem. She’s hell-bent on poking, sticking, or stabbing anyone that steps out of line.

But when a couple Santa Fe sidewinders ride into town searching for their missing uncle, they land neck deep in lethal gunplay, nasty cutthroats, and endless stinkin’ snow. Their search leads them to throw in with

Clementine to hunt for a common enemy.

What they find chills them all to the bone and sends them on an adventure they’ll never forget.

From the bestselling, multiple award-winning, humorous Deadwood Mystery series comes a new herd of tales set in the same Deadwood stomping grounds, only back in the days when the Old West town was young.

A Long Way From Ordinary:

There’s gold in them there hills!” … and something deadly, too.

Danger the likes Boone McCreery has never seen is brewing in the Black Hills. Fresh in from Santa Fe, he’s returned to Deadwood to seek justice for his uncle—and maybe to see about a girl. Little did he know his search for justice would have him stumbling into a hornets’ nest beyond his worst nightmare. One thing is for certain, the trouble he and his compadres chance upon deep in the trees is a LONG way from ordinary.

Kick up your spurs and enjoy another rip-roaring, wild ride with Boone, Rabbit, Clementine, and Hank through the pages of the second book in the Deadwood Undertaker series.

About Ann and Sam:

Junction Mystery Series, Dig Site Mystery Series, Deadwood Undertaker Series (with her husband, Sam Lucky), and AC Silly Circus Mystery Series. Her Deadwood Mystery Series has won multiple national awards, including the Daphne du Maurier for Excellence in Mystery/Suspense. Ann has a B.A. in English with an emphasis on creative writing from the University of Washington and is a member of Sisters in Crime and Western Writers of America. She is currently toiling away on her next book, wishing she was on a Mexican beach with an ice-cold Corona in one hand and a book in the other. When she is not dabbling in fiction, she is arm wrestling with her two kids, attempting to seduce her husband, and arguing with her sassy cats.

Sam Lucky likes to build things—from Jeep engines to Old West buildings to fun stories. When he is not writing, feeding his kids, attempting to seduce his wife, or attending the goldurn cats, he is planning food-based book signing/road trips with his wife and working on one of his many home-improvement projects.