When The Darkness falls the only hope for mortal men and women are the Neteru warriors and the Neteru Guardian Team. Catch The Vampire Huntress Legends series at http://www.vampire-huntress.com — a twelve book series created by: L.A. Banks for St. Martin’s Press/Griffin. Book 10, “The Darkness,” is available in stores February 2008—or pre-order on-line. “If you’re afraid of the dark, stay in The Light!” 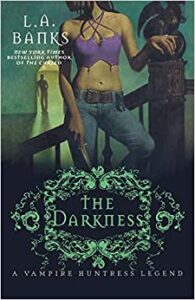 ABOUT THE BOOK:
The Darkness descends with the arrival of the Armaggedon in the tenth novel of L. A. Banks’s bestselling Vampire Huntress Legend series.

After the battle at Masada, the Neteru team returns to San Diego believing forty-thousand demons had been eradicated and that Lilith’s spawn has been killed. But somehow the treacherous little creature got away. Just as had been prophesized at the dawn of the Armageddon, the anti-Christ has been born and will soon rise to power.

Rewarded for her creation, Lilith is given the daylight bite and power to make Councilmen day-walkers. Having Fallon Nuit and Sebastian able to withstand sunlight is a huge problem, especially when they are adding new master vampires at recordbreaking levels. Meanwhile the dark realms are healing and adding to what had previously been wiped out―feeding off the dark energy of the newly created anti-christ who is only waiting to emerge.

Sheila Englishhttp://sheilaenglish.com
Award-winning author of short stories and comic books. Telly award-winning producer and director of many book trailers.
Previous articleMY BEST RECIPE: KRISTINE RAYMOND SHARES A SWEETHEART OF A RECIPE!
Next articleKeeper of the Lights Gets 5-Stars from Reader’s Favorite