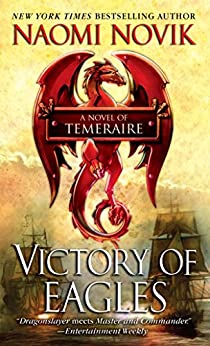 After the events of the last book, Laurence has been found guilty of treason and is in jail. Temeraire has been placed in the breeding grounds and, if he does not behave, Laurence will be hanged.

Temeraire is continuing his quest for better living conditions for dragons in Britain and is making as many friends as he can of the rest of the dragons, and humans, at the breeding grounds.

Unfortunately, Napoleon has marshalled the power of his Army and Navy and is now invading Britain….yikes.

Temeraire and the dragons in the breeding grounds are without captains, but, Temeraire organizes them to fight on their own if needed.

As Napoleon’s army advances in Britain, the breeding ground dragons fight, and Laurence is let out of jail to lead all the dragons.

Oh, to find out what happens, you will have to read the book.

“Victory of Eagles” is the 5th book in the Temeraire series and is a fast fun read filled with fierce battles of war and politics as Temeraire and Laurence are reunited and vow to never be separated again.

About the Book:
Naomi Novik’s triumphant debut, His Majesty’s Dragon, introduced a dynamic pair of heroes to the annals of fantasy fiction: the noble fighting dragon Temeraire and his master and commander, Capt. Will Laurence, who serves Britain’s peerless Aerial Corps in the thick of the raging Napoleonic Wars. Now they soar to new heights of breathtaking action and brilliant imagination.

It is a grim time for the dragon Temeraire. On the heels of his mission to Africa, seeking the cure for a deadly contagion, he has been removed from military service–and his captain, Will Laurence, has been condemned to death for treason.

Separated by their own government and threatened at every turn by Napoleon’ s forces, Laurence and Temeraire must struggle to find each other amid the turmoil of war and to aid the resistance against the invasion before Napoleon’s foothold on England’s shores can become a stranglehold.

If only they can be reunited, master and dragon might rally Britain’s scattered forces and take the fight to the enemy as never before–for king and country, and for their own liberty. But can the French aggressors be well and truly routed, or will a treacherous alliance deliver Britain into the hands of her would-be conquerors?