Memoir Monday: Shadows Over the Sun by Giselle J. Robin 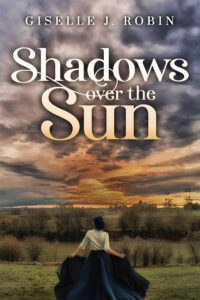 Growing up in Nazi Germany, finding love in Hungary and starting an organic winery in Australia is just the general points of this amazing memoir by Giselle J. Robin. The strength and inspiration of one woman’s life, growing up in an uneasy world, moving on and then having to face mental issues, it is a story to inspire anyone! Shadows Over the Sun by Giselle J Robin is a must-read!

This compulsively readable autobiography traces the journey of a remarkably courageous woman from a childhood under Nazi Germany, through her marriage and then emigration to Australia to make a new start by developing an organic winery in McLaren Flat in South Australia. After traumatic experiences she has had to battle with bipolar mental disorder. Giselle tells her story in flawless prose and with compelling honesty. This is the story of a strong woman adding to the growing literature on women’s lives. The story takes you in from the first page and never lets you go.

An honest and precise account of a life journey, demonstrating life struggle and immense resilience of the author to bounce back and reinvent herself. Great buoyancy shown for the life by Giselle as she immerses herself in her many endeavors.

Triumph of the spirit over adversity.

I cannot believe the strength and courage of Giselle.

I found the story most informative and have enjoyed reading it.

LORRAINE ROSENBERG, MAYOR OF THE CITY OF ONKAPARINGA

Giselle’s story is a story of the triumph of determination and optimism in the face of tougher challenges than many of us could imagine surviving. An interesting read indeed.

What a truly amazing life Giselle has led. Her book is bursting at the seams with the full panoply of what life can bring – or throw at us. Giselle’s story has it all. I was warmed by her spirit in truly tough times and her irrepressible sense of adventure that has helped her to pick herself up and get on with life. After her difficult journey through episodes of mental illness which led to spiritual healing she has no doubt much wisdom to share with others on a similar journey.

A life with so much sadness and trauma begs the question of how Giselle Robin survived. However, she not only survived but has ultimately triumphed over a mental illness – which was mismanaged most of the time. Again and again Giselle has picked up the shards, worked out how to piece them together and then got on with life. Her story – in all its innocent frankness – is an inspiring one.