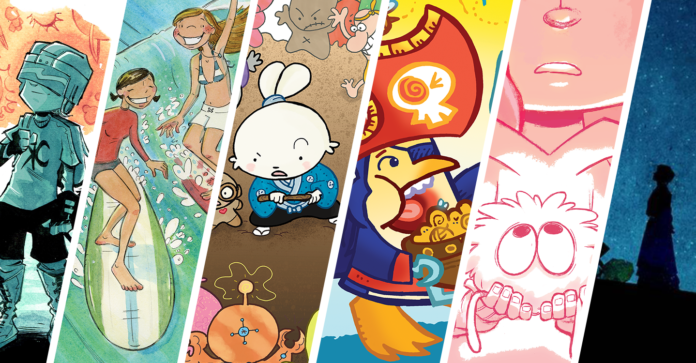 IDW and imprint Top Shelf Productions have unveiled their Summer 2021 lineup of middle-grade and YA graphic novels. Here’s a look at their spectacular line-up for next year:

Better Place, by debut author Duane Murray and Shawn Daley (Samurai Grandpa), tells the story of Dylan, a young boy in a new neighborhood whose best (and only) friend is his grandad. Together, with the power of imagination, they entertain themselves as Red Rocket and Kid Cosmo, saving the world daily from evil. But when Dylan learns that his grandad is suddenly gone to “a better place”, the sidekick ventures off on a grand adventure to find his superhero. Better Place (ISBN 978-1-60309-495-5), a touching story about family, grief, change, and growth, will be released as a 160-page paperback in August with an MSRP of $19.99 US ($25.99 CAN).

Chibi-Usagi: Attack of the Heebie Chibis, by Stan Sakai and Julie Fujii Sakai, makes the rich world of multiple award winner Usagi Yojimbo accessible to readers of all ages in this chibi-style original graphic novel. Stan Sakai’s beloved rabbit samurai has won countless fans over his 35-year history, thanks to a clever blend of thrilling action, heartwarming characters, and realistic portrayal of Japanese culture. In this tale, Chibi-Usagi and his friends must rescue a village of clay people from the threat of the dreaded Salamander King. Chibi-Usagi (ISBN 978-1-68405-790-0) will be released as a 120-page paperback in June 2021 with an MSRP of $12.99 US ($16.99 CAN).

The Girl and the Glim, the exciting debut graphic novel from animator India Swift, with colors by Michael Doig, gives the classic new kid in school story a wild science fiction twist. Thirteen-year-old Bridgette is nervous enough about starting class at her new school, but just when she thinks the bullies will be as bad as things can get, her life is turned upside down by an otherworldly being from outer space that only she can see! Now, the new kid is the only thing standing between her classmates and total destruction in this wildly imagined, beautifully drawn story about the importance of friendship, human connection, and doing what’s right. The Girl and the Glim (ISBN 978-1-68405-741-2) will be released as a 128-page paperback in August 2021 with an MSRP of $12.99 US ($16.99 CAN).

Marie Curie: A Quest For Light, written by Frances Andreasen Østerfelt and internationally acclaimed Danish astrophysicist Anja Cetti Andersen with art by Anna Blaszczyk, focuses on the exceptional life and groundbreaking research of Marie Curie, the first female Nobel Prize winner, who expanded scientific understanding and created new opportunities for women. Curie’s unique drive, against all odds, to understand Nature’s ways and laws led to ground-breaking discoveries, which revolutionized medical theory and practice. Marie Curie (ISBN 978-1-60309-494-8) will be released as a 136-page paperback in August 2021 with an MSRP of $17.99 US ($23.99 CAN).

Pirate Penguin vs. Ninja Chicken Vol. 3: Macaroni and Bees?!?, by Ray Friesen, is the latest installment featuring the ridiculous adventures of the fan-favorite flightless fighting friends. Whether they encounter werewolf shampoo, time travel, or anti-gravity popcorn, the bouncy battle birds are always engaged in the ultimate competition: to see which friend will win once and for all. Pirate Penguin vs. Ninja Chicken Vol. 3 (ISBN 978-1-60309-497-9) will be released as a 64-page hardcover in August 2021 with an MSRP of $9.99 US ($12.99 CAN).

The Science of Surfing: A Surfside Girls Guide to the Ocean, by Kim Dwinell, is the coolest way to experience a beach vacation and learn at the same time. Sam and Jade, from the pages of the beloved graphic novel series The Surfside Girls, explain the science behind the amazing wonders of the sea — everything from life-sustaining plantlife to aquatic animals to crashing waves. Plus, there’s a whole step-by-step chapter on how to surf. The Science of Surfing (ISBN 978-1-68405-837-2) will be released as a 136-page paperback in July 2021 with an MSRP of $9.99 US ($12.99 CAN).

“Today’s young readers have an insatiable appetite for vibrant, thoughtful stories, so we’re thrilled to deliver an inspired mix of titles that showcases the full potential of graphic storytelling,” says Justin Eisinger, Editorial Director, Graphic Novels & Collections for IDW. “These books run the gamut from outright fun to introspective and even educational, further evidence that IDW and Top Shelf are home to an eclectic, necessary library of fiction and non-fiction graphic novels.”