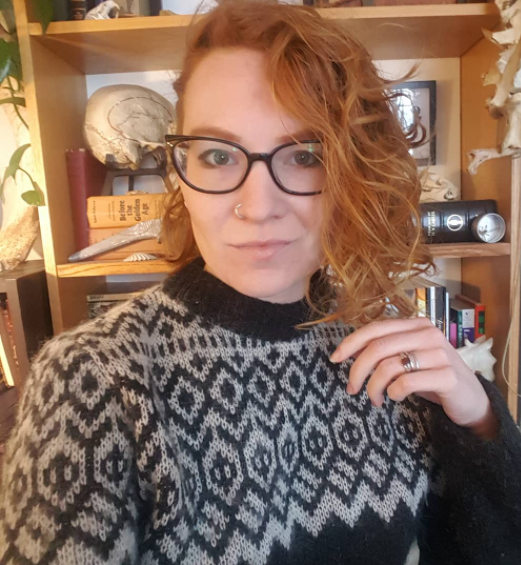 This year was a wild ride. I don’t think many will come out of 2020 the same as they came in. I know I won’t. I lost a lot this year, lost a lot in the past four years, honestly–being disabled and queer without healthcare isn’t easy on the best days, even for someone as privileged as I am. So, what did this chaotic, raw year teach me? I learned more about my non-binary gender. I learned more about who my friends are–and aren’t. I learned how many people can overlook the pain of others. And I learned how beautiful and powerful a community can be.

2020 taught me that life goes on. Even when we think it shouldn’t.

I was lying in a dark hotel room a few weeks ago, exhausted and in pain. We were about to get laid off for the season after only a few months of income. I voiced, quietly, to my spouse: I think this year broke me.

In many ways it did. This year wasn’t just the year of pandemic, and election, and the threat of an arguably needed societal collapse. It was also the year I grieved for my father; a year where I was joined in grief by thousands and thousands of people. Every morning I’d wake up with a tiny voice in my head insisting: I’m not OK. Most nights, that voice is still there when I crawl into bed. But outside, the seasons changed, votes were counted, and deadlines came and went. Somedays I met them, some days I didn’t,

In my debut, Smoke and Rain, Arman reminds Alea: “This story just shattered you.” It seems fitting that life grind to a halt without my father, the biggest piece of my life. Now, I’m grateful it didn’t.

2020 taught me about writing in a vacuum.

There’s no such thing as writing in a vacuum. Many artists, as Amanda Palmer argues, turn our creative blenders up until the fragments of other work and ourselves aren’t recognizable. The most we can do is interrogate our biases and try to do no harm. This is true for writing, for archaeology, for life.

Writing in isolation this year, however, came close. My plans shifted from a big summer tour for Blood and Mercy, the finale of my fantasy series, to virtual events and essays. Most of my writing career I was told I have to do this marketing scheme or that publicity stunt for success. This year I was forced to cast those off. Instead, the only thing I could do was write more, write better, write differently. Make my work the best it could be. But how?

Early in the pandemic I watched musician Trevi Moran’s coming out video. In it she says “If you’re ever lost, don’t go out. Go in.” What else was there, this year, but to dig deeper? I’m an archaeologist, after all. I excavated the bones of my work, drawing a eulogy from the fragments of story left behind. I opened a new document and gave myself permission to discard every rule I’d ever learned.

“This story just shattered you. Gather the pieces and kindle the flames.” This might have been the most important writing lesson I’ve ever learned. And it was true for myself, too.

I’ve seen many arguments that one can separate the artist from the art. It’s not true. Creatives build universes from the pieces of their own world they’ve held on to, fitting them together until you don’t notice the gaps, until it resembles the reality they fear, or one they wish for. Just like we are a way for the universe to know itself, exploring our art is the way we discover ourselves.

I often liken my mental landscape to a tower filled with books and oddities and a chaotic card catalogue of facts and people and how to navigate this world. Beyond the tower’s single window is a bleak, desolate world that I’ve frankly never bothered to explore.

This year taught me I could brave the desolation. It taught me I had to. To not go out, but go into the wilderness of my mind. I cast off hate and dishonesty and everything I thought I was supposed to be. None of that helps you survive the wilderness. And relinquishing so much, both within myself and for my craft as a writer, left nothing but the truth, the pith.

It’s cold in the wild, alone. There is far to go, and so much work still to be done. But life goes on, and so do we. We gather the pieces and kindle the flames. This is where we are reforged. 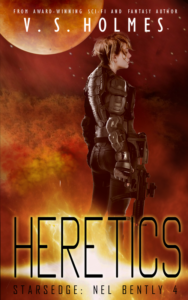 Releasing April 27th
WITHOUT EARTH, NEL HAS NO WHERE TO RUN

Hot-tempered Dr. Nel Bently must put aside her distrust of the man who vandalized her life’s work to protect Earth. Together, they embark on a global mission of connect-the-dots searching for the victims of a deadly radio transmission. Without answers, her own mother–and the few communities clinging to life–will be next.

V. S. Holmes is an international bestselling author. They created the REFORGED series and the NEL BENTLY BOOKS. Smoke and Rain, the first book in their fantasy quartet, won New Apple Literary’s Excellence in Independent Publishing Award in 2015 and a Literary Titan Gold Award in 2020.

When not writing, they work as a contract archaeologist throughout the northeastern U.S. They live in a Tiny House with their spouse, a fellow archaeologist, their not-so-tiny dog, and own too many books for such a small abode. As a disabled and queer human, they work as an advocate and educator for representation in SFF worlds.