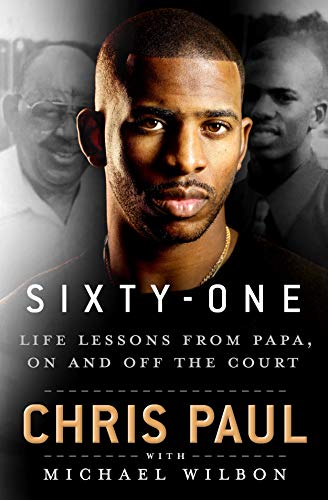 It was announced today that Phoenix Suns point guard, ten-time NBA All Star, and president of the National Basketball Players Association Chris Paul will publish his first book with St. Martin’s Press entitled Sixty-One: Life Lessons from Papa, On and Off the Court. Publication for the book is planned for September 2021. St. Martin’s Publishing Group SVP/Editor-in-Chief George Witte acquired rights from Anthony Mattero and Jessica Holtz at Creative Artists Agency; Macmillan Children’s Publishing Group SVP/Publishing Director Jennifer Besser acquired an illustrated children’s version of the book. Chris has tapped acclaimed journalist and ESPN broadcaster Michael Wilbon to help him tell the story. A live-action biographical film based on Sixty-One is in development for Disney+.

No ordinary sports memoir, Sixty-One is the deeply personal story of Chris Paul’s relationship with his late grandfather “Papa,” Nathaniel Jones, who had a profound impact on his values and work ethic. The day after Paul signed his letter of intent to play college basketball for Wake Forest, he received a shattering phone call. Jones, a pillar of the Winston-Salem community where he owned and operated the first Black-owned service station in North Carolina, was mugged and ultimately died from a heart attack resulting from the assault. Days later, in the final game of his high school career, Paul would score sixty one points in tribute to the age of his grandfather’s passing.

In Sixty-One, Chris Paul will speak about his relationship with his grandfather and the crucial lessons he learned from Papa’s example. He also will discuss the close-knit small town black community that raised him, the foundation of faith and family he built his life upon, and what it means to be a positive light within your community and beyond. Sixty-One will be an unusually intimate memoir by a leading voice in sports, popular culture, and social justice issues.

George Witte says, “Chris Paul’s memoir will move, inspire, and surprise readers who know him only as a sports figure. There is so much more to his life, and Sixty-One will reveal it.”

Chris Paul comments, “Sixty-One is a celebration of my Papa Chilly who helped shape who I am today and what I value. His legacy of hard work and service to others is woven through the fabric of my parenting, my community work and how I have approached my basketball career. That high school game where I scored sixty one points was a healing moment through basketball and I am thrilled to work with Michael Wilbon to share this story with the world.”

ABOUT CHRIS PAUL Chris Paul is a ten-time NBA All-Star and two-time Olympic Gold medalist. Paul currently plays with the Phoenix Suns and previously played with the Oklahoma City Thunder, Houston Rockets, Los Angeles Clippers, and New Orleans Hornets. Off the court, he’s a father, husband, entrepreneur, activist, and philanthropist. He has served as the President of the National Basketball Players Association since 2013. His business partnerships include the Jordan Brand, State Farm Insurance, Turner Impact Capital, Muzik, WTRMLN WTR, Beyond Meat, PlayersTV, Uncharted Power, Calm, Fanatics, Knowable, Panini Cards, and more. In his home state of North Carolina, he is part owner of the Winston-Salem Dash and owner of the CP3 Basketball Academy. He is the co-founder of Go Hoop Day, a day for celebrating the game of basketball worldwide, and he co-hosts The Baha Mar Showdown, the annual celebrity golf showcase created by Turner Sports and CAA Sports. His production company, Ohh Dipp!!! Productions, creates content across multiple platforms and he has executive produced projects including Chapter 3, Crossroads, The Game Changers, Blackballed, Why Not Us, The Day Sports Stood Still, and American Sole. The Chris Paul Family Foundation continues to provide resources that enrich and strengthen underserved communities across the country.

Paul co-launched the Social Change Fund dedicated to investing in and supporting organizations focused on empowering communities of color and advocating for the human rights of all black lives. His philanthropic efforts have earned him the 2016 ESPYs “Humanitarian of the Year” award, 2016 Mannie Jackson Human Spirit Award and the NBA Community Assist Award five times.