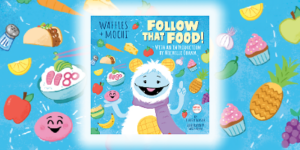 Random House Children’s Books and Clarkson Potter will launch a program based on the new Netflix children’s series, Waffles + Mochi, from Higher Ground Productions, President Barack Obama and Michelle Obama’s production company. The publishing program will include three children’s titles releasing this spring and summer, and a cookbook for children ages 3 to 7 coming in Fall 2021.

The children’s publishing program begins with a picture book to be released on March 2, 2021, FOLLOW THAT FOOD! , written by Christy Webster, illustrated by Sarah Rebar, featuring an introduction written by Michelle Obama. The book follows best friends Waffles and Mochi as they plan to make a special treat for their new supermarket coworkers. Their search for the perfect recipe takes them around the world as they investigate ingredients, find flavors, and make new friends. Two additional titles will publish on July 13, 2021 – PICKLE PARTY!, a “Step Into Reading” early readers format and RAINBOW OF FLAVORS, a deluxe paint box book with stickers.

In November, Clarkson Potter will publish WAFFLES + MOCHI: THE COOKBOOK for children ages 3 to 7, featuring dishes from the show and other inspired meals for families to cook together, in collaboration with author, recipe developer and New York Times cooking writer Yewande Komolafe.