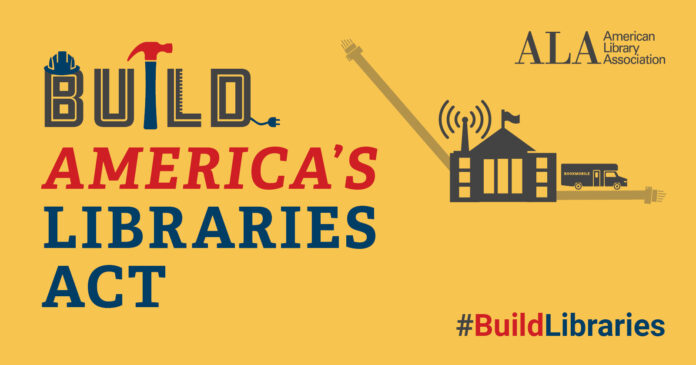 Today the American Library Association (ALA) welcomed the introduction of the Build America’s Libraries Act in the House of Representatives by Reps. Andy Levin (D-MI-9), Don Young (R-AK-at large) and 52 cosponsors. The legislation would provide $5 billion to support long-term improvements to library facilities, including addressing needs that have arisen due to COVID–19. The bill would enable libraries to better serve rural, low-income and underserved areas, as well as people with disabilities and other vulnerable library users.

“The pandemic has highlighted the importance of community places – physical spaces, like libraries, where we can meet, read, and learn together,” said ALA President Julius C. Jefferson, Jr. “We must ensure that libraries are safe, healthy, and accessible to everyone, not only today, but for decades to come. At the same time, the pandemic has exposed the depths of the digital divide. Libraries work on the front lines of digital inclusion, but many of them are doing so with twentieth-century facilities. To solve twenty-first-century problems, libraries need twenty-first-century infrastructure.”

America’s aging library infrastructure faces challenges ranging from broadband capacity, mold, and accessibility barriers to COVID-19 to natural disasters such as hurricanes and wildfires. The average U.S. public library building is more than 40 years old. Inadequate capital funding has made it difficult for libraries to address building concerns. At the federal level, Congress has not provided dedicated funding for library facilities since 1997.

The Build America’s Library Act would begin to address decades of underinvestment by providing funds to repair and construct modern library facilities in underserved and disadvantaged communities. Funding could be used for constructing, renovating, modernizing, or retrofitting library facilities, including by enhancing facilities to reduce the risk of COVID-19 and vulnerability to natural disasters.

American Institute of Architects (AIA) EVP and Chief Executive Officer Robert Ivy
“America’s libraries have evolved with the times, and today we need them more than ever. AIA is pleased to again support the Build America’s Libraries Act to enable upgrades to our nation’s libraries to address existing challenges, including environmental hazards and accessibility barriers. This proposal is aligned with AIA’s Policy Platform goals to invest in community & civic infrastructure. The average public library building is more than 40 years old – in fact, half of the libraries that Andrew Carnegie funded a century ago are still in use as libraries today. Congress has not provided dedicated funding for library buildings in more than 20 years. This bill would provide much needed funding to make libraries safer, healthier, modern, sustainable, and fully accessible to people with disabilities – with priority given to improving libraries in the most underserved communities.”

National Association of Counties Executive Director Matthew Chase
“Counties are calling for solutions to modernize our nation’s infrastructure, including public facilities like libraries. Strong libraries make strong county partners, from education to workforce development and even COVID-19 vaccine distribution. With 900 of the nation’s public library systems organized as part of their county government and the cost of vital capital improvements falling primarily on local governments, we welcome the federal resources proposed under this legislation.”

ALA is asking library advocates to urge their Representatives and Senators to join as cosponsors of the Build America’s Libraries Act.