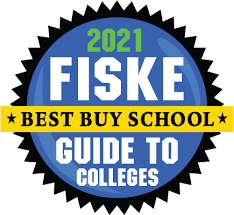 Fiske Guide to Colleges, the legendary college guide that generations of students, parents, and counselors have relied on to inform their college searches, announced today that it will no longer report SAT and ACT test score ranges for colleges and universities in the guide.

Edward B. Fiske, creator and editor of the bestselling guide, explained that recent trends have called into question the accuracy and validity—and hence, the usefulness—of admissions test score data. “We take pride in our reputation as a trusted source of reliable admissions information,” he said. “Rather than publish inaccurate and misleading data, we have decided to omit any reporting of score ranges for the foreseeable future. To do otherwise would be a disservice to our readers.”

Fiske, a former Education Editor of The New York Times, said that the change will become effective with the 2022 edition, due to be published July 6, 2021.

The Introduction to the upcoming edition cites several reasons for the decision: “The most obvious recent challenge to the integrity of SAT and ACT score ranges has been the soaring number of colleges adopting admissions policies that are ‘test optional’ or ‘test blind,’” it states. According to The New York Times, about 1,700 schools are not requiring SAT or ACT scores this year. The Common Application reported earlier this month that only 44 percent of students who applied to college through the Common App through February submitted SAT or SAT scores – down from 77 percent last year.

The effect of such policies, the introduction continues, is to reduce the proportion of applicants submitting test scores, a trend that has been exacerbated by the COVID-19 pandemic and the widespread closing of test sites. “Unless the published score ranges reflect the scores of all freshmen, not merely those who were able to take the tests and chose to submit scores,” it says, “the usefulness of these score ranges for assessing both an applicant’s chances of admission and where they would fit into the academic environment of the school is seriously compromised. Incomplete, and thus misleading, scores serve no one’s interest.”

“The inequities associated with the use of standardized tests in college admissions decisions loom large, including the way in which they can scare off applicants with compelling stories or circumstances that would merit a closer look,” said Beane. “Many of us will welcome this decision by the Fiske Guide as a timely and enlightened contribution to the admittedly complex debate over how to create a more equitable admissions process.”

The Introduction notes that the decision to suspend the publication of test score ranges was made in the context of widespread current debate over the future role of SAT and ACT scores in college admissions, including the extent to which admissions policies of selective colleges inadvertently perpetuate structural racism and economic inequality.

The Introduction says that while there once was a time when admissions officers could credibly use such scores to identify talented “diamonds in the rough” who might not otherwise come to their attention, “the enormous expansion of the $1 billion test-prep industry that has grown up around admissions tests has now tipped the scales back in favor of privileged applicants with access to tutors and other sophisticated test prep and reduced the opportunities for those diamonds to glitter,” it says. “Indeed, a wide body of research has shown that SAT and ACT scores track closely with socioeconomic data and may say more about a student’s zip code than about their academic potential.”

The Introduction goes into detail on the reasons that the Fiske Guide published test score ranges in the past and why this policy is now being reversed. It also discusses trends that are leading college admissions directors to pay decreasing attention to such scores in general, and it offers college-bound high school students advice on how, in the absence of test score ranges, to estimate their admissions prospects at competitive schools and how they would fit into the academic climate of various institutions. Among other things, it urges students to focus on two factors: high school grades and whether they took advantage of the most challenging course offerings at their school.

Edward B. Fiske served for 17 years as an education editor and writer at the New York Times. Realizing that college-bound students and their families needed better information on which to base their educational choices, he created Fiske Guide to Colleges, which continues to be updated annually with the Fiske editorial team.

Sourcebooks is a thriving entrepreneurial company that brings extraordinary authors to readers in the most dynamic, data-driven ways. We create books that transcend categories and defy odds and have been honored with hundreds of national bestsellers and awards. We are home to enthusiastic, book-loving employees who are dedicated to connecting books to readers in new and innovative ways. Story by story, book by book, we have touched over 100 million lives. Join us as we change 100 million more.

Visit sourcebooks.com for more information.The decision to eliminate test score ranges was made with input from the Fiske Guide’s editorial advisory group, a diverse panel of 27 secondary school college counselors throughout the United States. The decision was variously applauded as “bold” and “forward thinking” by members of the advisory group, including Nancy Beane, a former president of the National Association for College Admission Counseling (NACAC).