Search
Home Blog Dreaming of the Stars? NASA Has A Book For You! And It’s... 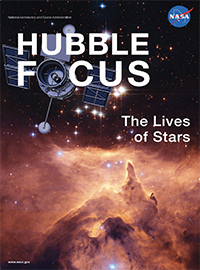 NASA’s Hubble Space Telescope team has released a new edition in the Hubble Focus e-book series called “Hubble Focus: The Lives of Stars.” This e-book highlights the mission’s recent discoveries and observations related to the birth, evolution, and death of stars.

“Hubble has scoured the skies for more than 30 years, revealing untold celestial wonders,” said Jennifer Wiseman, senior project scientist for the Hubble Space Telescope. “In this new e-book, readers are transported across space and time to take a closer look at the stunning and chaotic processes stars undergo.”

Like brilliant diamonds against the inky void of space, each twinkling star is a radiant cosmic wonder. Many stars grace the galaxy for billions and billions of years, leading tame and rather uneventful lives. Hubble has even spotted some that are nearly as old as the universe itself, providing a window to the distant past.

The mission has pinpointed new stars that more recently burst to life from swirling clouds of gas and dust peppered throughout the galaxy. And it has shown that some of these nascent stars are ringed with dusty debris, from which planets may form.

Stars live such long lives compared to human lives that it seems they exist outside of time, immune to the effects of aging. But stars aren’t forever; just as new ones are bursting into life on a regular basis, some run out of fuel every day. Hubble has documented the death throes of stars to help us better understand the role they play in cosmic evolution.

Whether a small star sloughs off its outer layers gently or a massive star blasts material out in a supernova, the deaths of stars seed the universe with new elements. The ejected material may be recycled into later generations of stars, planets, and perhaps living things.

“When we look at the stars sprinkled throughout the universe, we see a wide range of phenomena,” said Ken Carpenter, Hubble’s operations project scientist. “Studying them continues to help us understand the universe and our place within it.”

Hubble has spotted countless stars roaming the galaxy alone or in pairs, but sometimes huge groups of stars are born in a giant litter of dozens to a million stars held together by gravity. By studying these star clusters, Hubble offers us new insight into stellar and even galactic evolution.

One such discovery revealed that stars huddled near the center of our home galaxy, the Milky Way, may not have originated here. Instead, our galaxy may have cannibalized smaller galaxies that passed too close to escape the Milky Way’s gravitational grip. 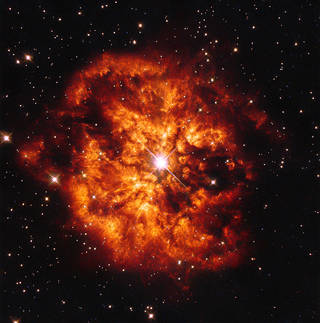 The star WR 124 lights up a brilliant, tangerine-colored nebula in this Hubble image. WR 124 is ejecting gas outward at speeds over 90,000 miles per hour into the surrounding nebula.
Credits: ESA/Hubble & NASA; Acknowledgment: Judy Schmidt (geckzilla.com)

Hubble also used star clusters to weigh our galaxy to determine how much mass is locked up in dark matter. But stars in clusters aren’t the only ones that can offer cosmic clues.

Through its exploration of stars, Hubble has traced many aspects of the evolution of the universe, revealing clues to its past and present, while Hubble’s future observations may offer hints to its ultimate fate.

“Hubble will continue to help us learn more about the universe for years to come,” Wiseman said. “Understanding the dynamics of stars is key to unraveling many cosmic mysteries.”

As the third installment in a series, this e-book builds on the wealth of information shared in previous renditions, which focused on the solar system and galaxies. Upcoming editions will zoom in on other cosmic topics, such as exoplanets – worlds that circle distant stars.

“Hubble Focus: The Lives of Stars” is compatible with most electronic devices and can be downloaded in multiple formats for free from: