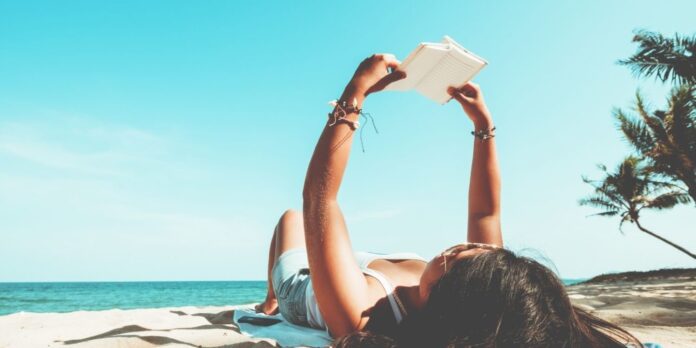 What better way to spend a sunny summer day than at the beach, reading a beach book, soaking up a little Vitamin D before moving into the shade of an umbrella (we don’t wanna get sun burned) so we can continue enjoying the lull of the ocean waves and the refreshing breeze.

If you’ve already escaped to Key West with Island Affair and Anchored Hearts and jetted up to NYC with Summer in the City, have no fear, I’ve got a list of summer romances waiting to hit the beach or the pool or the back yard hammock or the couch in the cool AC with you.

Get ready to one-click and treat yourself to these FAB romances:

1. The Boyfriend Project by Farrah Rochon

Go ahead and preorder: The Dating Playbook also by Farrah Rochon.

Along with Recipe for Persuasion (you’ll also wanna preorder: Incense and Sensibility) from Sonali Dev.

And the new Audible original Sun of a Beach by Mia Sosa.

You know it’s coming, so preorder A Lot Like Adíos by Alexis Daria.

Plus Incendiary, book one in the Hollow Crown duology.

And for more fun, preorder How to Marry Keanu Reeves in 90 Days.

7. Beth and Amy by Virginia Kantra

Book two in Virginia Kantra’s Little Women retellings; and treat yourself to book one, Meg and Jo, while you’re at it.

8. An Earl, The Girl and A Toddler by Vanessa Riley

Book two in Vanessa Riley’s latest series is ready to brighten your summer along with book one, A Duke, the Lady, and a Baby.

9. The Last Bookshop in London: A Novel of World War II by Madeline Martin

10. Pack Up the Moon by Kristan Higgins

11. People We Meet on Vacation by Emily Henry

And the new book from Emily Henry out now is definitely on my list of books to “summer” with.

If you’re reading outside, make sure you lather on the sunscreen and be sure to hydrate. This summer, and always, I wish you lots of cozy reading time to get lost in some great books!

Each connected novella in this fun, fresh Rom-Com anthology follows a different woman from a group of NYC friends whose plans to escape the summer heat with a fabulous girls-only weekend suddenly lose steam when an unexpected blackout cuts off power to all of Manhattan. But while the lights are out, enemies become lovers, acquaintances find they have more in common than a pack of matches, and the city really heats up!

There’s nothing like summer in Manhattan. The days are long and the nights are even longer. But when the lights go out in the city, fireworks explode…

Night at the Museum by Lori Wilde
Art restorer Ria Preston knows a thing or two about beauty. And when she discovers her neighborhood crush, gregarious Wall Street advisor Vic Albright, is stuck overnight in the Metropolitan Museum of Art with her, she can’t resist taking him on a very private tour…

Lights Outby Priscilla Oliveras
Back in high school, Vanessa Ríos and Mateo Garza were theater troupe rivals. Now Mateo’s a rising Broadway star and Vanessa’s his most scathing critic. Cue a plot twist straight out of central casting: the two end up alone in his New York City apartment during the blackout, setting the stage for what could be their second act romance . . .

​Mind Games by Sarah Skilton
What happens in college stays in college–unless you never get over it. In fact, Alison has been waiting to take her revenge on Nick, once the hottest guy on campus, now the hottest guy on the rising magician’s circuit. But her plans to sabotage his first show are upended by the power outage. That’s when the real magic happens…