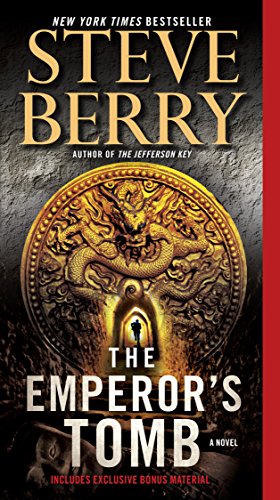 Cotton Malone and Casssiopeia Vitt are desperately running away from a helicopter that is strafing them as they climb a mountainside. The helicopter pilot has every intention of keeping them from reaching their destination!

But I get ahead of myself.

Two powerful men in China are vying to be Premier once the aging current ruler has passed.

Tang is ruthless….not afraid to kill to achieve his goals. He will rule with a heavy hand.

Ni is thoughtful and cares about doing the right thing. He will be a benevolent leader.

Russian scientist living in China, Sokolov, is on the verge of an amazing scientific discovery….that oil from a certain area in China is “abiotic” (meaning it is not from dead animals or plant-life, but, from the earth itself) and is thus…..limitless. With this discovery, if proven true, China will no longer need to import oil and will thus become more powerful, and independent, than ever.

Problem is: Sokolov has been kidnapped!

And the only two people who can help are: Cotton Malone and Casssiopeia Vitt.

I love Steve Berry, but, he can put out a clunker every now and then. “The Emperor’s Tomb” is a clunker. Way too heavy on history lesson and too little Malone and Vitt doing their thing. A bit of editing the history lesson would have helped this book avoid the bloat….464 pages, down to 364 would have been great. I skimmed the last 64 pages…..

Here are more clunkers. I normally keep these mini-reviews “hidden”, but, it may be time to unveil them!