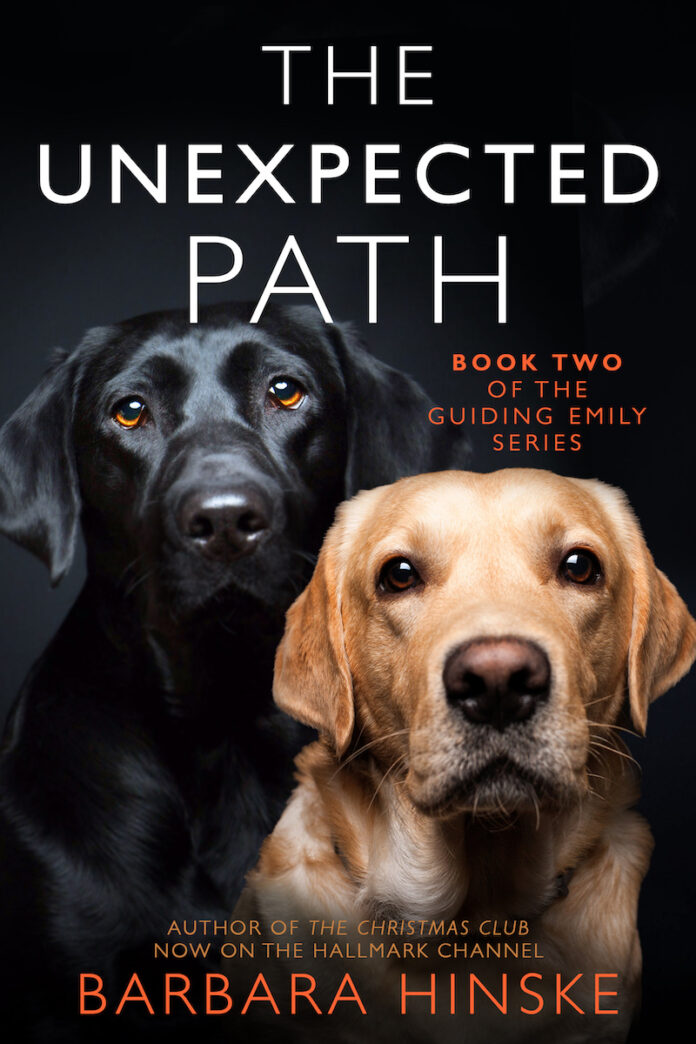 THE UNEXPECTED PATH BY BARBARA HINSKE

Guiding Emily: A Tale of Love, Loss, and Courage has been a reader favorite and has impacted others in ways I could never have imagined. I’ve connected with visually impaired people all over the world who tell me that Guiding Emily accurately and honorably portrays their mental and emotional journeys as they’ve lost their eyesight. They also insist that Emily Main’s journey to regain her independence has given them hope. I get a lump in my throat just writing those words. I can think of no better legacy than to give someone hope.

In recognition of its accuracy and hopeful message, Guiding Emily has replaced the Adventures of Huckleberry Finn as a textbook for adults who are learning braille. Counselors are recommending Guiding Emily to their patients for the same reasons.

I’m humbled by these achievements. The second book in the series has a lot to live up to. I didn’t want to let down the community of visually impaired people who have resonated with Guiding Emily. I also needed to write an engaging and entertaining book for my readers.

The Unexpected Path (the second book in the Guiding Emily series) comes out on November 16. Advance reviews have been stellar and I believe I’ve accomplished both objectives.

The Unexpected Path showcases the technology that enables the visually impaired to do their jobs as well as anyone else—and often even better. Emily is a senior programmer at a technology giant. Her text reader allows her to get through her emails much faster than if she read them and enables her to pinpoint buried problems in long strings of computer code.

Wayfinding provides a perfect example. Most of us can see where we’re going. We’ve also got GPS on our phones and in our cars. Those apps aren’t always accurate. Who hasn’t had our GPS take us the wrong way? We’ve become lost, which is at best an inconvenience and at worst, frustrating.

Imagine getting lost when you can’t see. I’ve interviewed dozens of visually impaired people for The Unexpected Path and every single one of them has reported being lost. It’s a common occurrence. And it is terrifying.

Mobility and orientation training includes sessions on how to deal with being lost. Sounds, smells, the feel of the sun on the face, and the location of landmarks (mailboxes, curbs, street lights, planters) all come into play.

I write a scene in The Unexpected Path where Emily leaves home to run a quick errand without Garth. Handlers are encouraged to go out without their guide dogs from time to time because handlers need to keep their white cane skills sharp and guide dogs need to learn to stay home. Emily becomes disoriented due to sidewalk construction that blocks her path. It’s night—in San Francisco—and the fog is rolling in. No one else is out and about. She has to find her way home.

Writing that scene was harrowing. My pulse is pounding, now, thinking about it. She uses her excellent problem-solving skills to find her way.

BARBARA HINSKE is an attorney and novelist. She’s authored the Emily series, Guiding Emily and The Unexpected Path; the mystery thriller collection “Who’s There?”; and the beloved seven-novel Rosemont series. Her Christmas novellas include Paws & Pastries, and The Christmas Club, which was made into a Hallmark Channel movie of the same name starring Cameron Mathison and Elizabeth Mitchell (2019). The novella No Matter How Far (included in the anthology A Keepsake Christmas, on preorder now) stars characters from Westbury, the charming, small town where her Rosemont series takes place.