“The alien world, spirit world, and quantum world are all the same…we are related, so, we are the aliens!”

Bruce Olav Solheim was born in Seattle, Washington, to Norwegian immigrant parents. Bruce was the first person in his family to go to college. He served for six years in the US Army as a jail guard and later as a warrant officer helicopter pilot and is a disabled veteran. He also worked as a defense contractor with Boeing for five years. Bruce earned his Ph.D. in history from Bowling Green State University in 1993. Bruce is a distinguished professor of history at Citrus College in Glendora, California. He was a Fulbright Professor and Scholar in 2003 at the University of Tromsø in northern Norway. Bruce has published twelve books and has written ten plays, six of which have been produced. The Bronze Star won two awards from the Kennedy Center American College Theatre Festival. The Epiphany was commissioned by the Kingdom of Norway and funded for a full production run with the original American cast. Bruce is a co-founder of Lockdown Theatre which has produced four streamplays (online, live, with remote actors) during the COVID-19 pandemic. He has lived a paranormal life since age four having experienced angels, demons, ghosts, cryptids, telepathy, psychokinesis, mediumship, and alien contact. Bruce has published a trilogy of paranormal books about his personal paranormal experiences: Timeless, Timeless Deja Vu, and Timeless Trinity, and most recently published a book about his contact with an ancient alien mystic—Anzar the Progenitor. Bruce has also published two comic books featuring an alien hybrid character named Snarc and will publish a new comic book called Dr. Jekyll Alien Hunter in 2022. Bruce is married to Ginger and has four children and two grandsons. 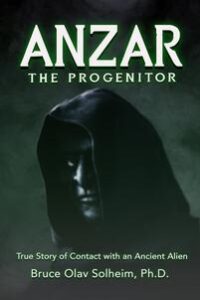 Anzar is an ancient alien mystic whom I have known most of my life and have been in weekly direct contact with since 2018. Anzar the Progenitor documents my spirit communication with this ancient alien, including his prophecies, sage advice, and commentary on the world. The book has extensive endnotes and includes my research on the nature of this communication through mediumship and my theory of how the alien world, the spirit world, and the quantum world are the same—a quantum nexus. We can no longer wait for government disclosure about UFOs and aliens. The time has come for personal revelation through a leap of consciousness in a new Era of Reconversion. We are all related and we are the aliens.

Anzar the Progenitor is a glimpse inside professor Bruce Solheim’s mind. It is at once a strange and a commonplace experience. Strange because Anzar is an ancient alien that is vibrantly alive to Solheim, and commonplace because many people have had similar “contacts,” but dare not speak about them. Solheim’s memoir is intimate, compassionate, and directly concerned with current and future events. I can think of no better endorsement than one I’ve borrowed from a delightfully pithy review of one of my books on Amazon.com: “I learn magic bro book kinda smack.”

Bruce Solheim is a scholar and a “psychenaut” who has boldly presented us with a detailed description of his dreams, his internal dialogues with the archetypal figure he refers to as “Anzar the Progenitor,” his reflections on paranormal science, as well as his many concerns about the challenges facing our troubled society. At times, the different threads of this narrative may seem confusing and disjointed. But, underneath the superficialities of politics and culture, there is a deeper message with much wisdom to be found: Be prepared for some stressful outcomes-and, most importantly, consider that this may be the moment when humanity really will take a giant leap forward. 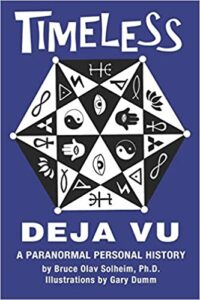 “Within the pages of this fascinating book cum journal, Bruce tiptoes into the realm of alien life, the visits from ‘out there’ to this planet – to Bruce Solheim. Aided by the illustrations of artist Gary Dumm, his experiences range from the year 1964 to the present, and it is his polished skill of communicating ‘scientifically’ (complete with quotes from important voices) as well as ‘paranormally’ that suffuses the veracity of his prose. He invites the reader into the ‘unknown’ and is able to bring belief, and acceptance, of his myriad possibilities, realizing that the spirit world, the alien world, and the quantum world are all the same. This is a very fine exploration of a more expansive ‘reality.’ It is bracing, challenging – and reassuring!”  _ Grady Harp, Reviewer with Top Shelf Magazine