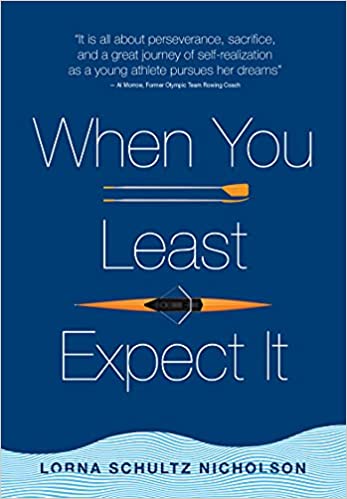 When You Least Expect It By Lorna Schultz Nicholson

How long can Holly keep her secrets?

Avid competitive rower Holly is seventeen. There is nothing she wishes for more than to compete in the Olympics. When she fails to make the rowing team that is going to Europe she is shattered. Her dream has exploded, and she is left dealing with the disappointment. She is also confronting a new reality at home: she and her mother have moved in with her mother’s annoying new boyfriend, Super Stew, and his two sons.

This move is a blow to the close relationship Holly thought she had with her mother.

Holly’s not a quitter. She lands a summer job, and then she is handed an unexpected lifeline in the person of a man who offers to coach her in a single rowing boat. For a girl raised without a father, the coach’s generosity – and rigorous demands – are a gift. But where did he come from and who is he, really? Discovering the answer plunges her into sadness – but then he inspires her to work beyond her comfort zone. Holly feels her mother won’t support her so she secretly trains. And when Holly starts seeing someone from work who could become a significant romantic partner, she hides that from her mother as well. How long can you keep secrets like this? This page-turning story is enhanced by fascinating detail of what it means to be a competitive rower — as well as an emotional core that is powerful and compelling. 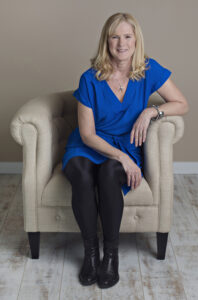 Lorna Schultz Nicholson has published children’s picture books, middle grade fiction, YA fiction and hockey non-fiction. Her books have been nominated for many different awards and are often on the CCBC’s Best Books for Kids and Teens list. Lorna loved sports as a child and she also loved to read and write. She is thrilled to be able to combine her love of literacy with her sport background. WHEN YOU LEAST EXPECT IT is a novel that is close to Lorna as she rowed for West Park Secondary School and the St. Catharines Rowing, and she also coached rowing at the University of Victoria. Lorna now lives in Edmonton with her husband (Go Oilers Go) and Mexican rescue dog.