Search
Home Blog BEHIND THE WORDS WITH SARAH SUNDIN 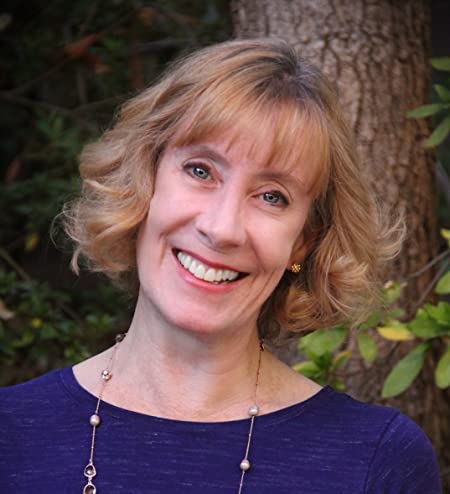 Behind The Words welcomes Sarah Sundin to the blog today!! Here latest release takes place in WWII Occupied Paris. First, tell our readers a bit about yourself.

I love to write about the adventure and romance of the World War II era. My novels have received starred reviews from Publishers Weekly, Booklist, and Library Journal. When Twilight Breaks and The Land Beneath Us were Christy Award finalists, and The Sky Above Us won the 2020 Carol Award. My husband and I have three grown children, and we live in Northern California. I also serve as co-director of the West Coast Christian Writers Conference.

I used to work on-call as a hospital pharmacist in addition to writing full-time, but I hung up my white coat in 2019. One job is plenty!

How long have you been writing?
Twenty-two years now, yet I still feel like a newbie and an imposter with my degrees in chemistry and pharmacy. Life can take you down some very unexpected roads—and writing is mine!

Give us a look at your ‘typical’ writing day.

Since I’m not a morning person, I take care of social media, emails, and business tasks in the morning. Over lunch, I read research books. Then in the afternoon when my creativity kicks in, I write—or outline or edit, wherever I am in the writing process.

Can we get a peek at your latest release, UNTIL LEAVES FALL IN PARIS?

As the Nazis march toward Paris in 1940, American ballerina Lucie Girard buys her favorite English-language bookstore to allow the Jewish owners to escape. Lucie struggles to run Green Leaf Books due to oppressive German laws, but she finds a way to aid the resistance by passing secret messages between the pages of her books.

Widower Paul Aubrey wants nothing more than to return to the States with his little girl, but the US Army convinces him to keep his factory running and obtain military information from his German customers. After they meet in the bookstore, Paul and Lucie are drawn to each other, but she rejects him when she discovers he sells to the Germans. And for Paul to win her trust would mean betraying his mission.

When I learned that thousands of Americans remained in Paris after the Nazis occupied the city, I wanted to know why. The US was still neutral, and American citizens had the right and the ability to return to the States—but many didn’t. Including Sylvia Beach, the owner of Shakespeare & Company, the iconic bookstore at the center of the 1920s expatriate community. Paul and Lucie are my answer to the question of why Americans remained, and Lucie’s Green Leaf Books is a nod to Shakespeare & Company.

The most difficult scene to write in Until Leaves Fall in Paris was one when Paul’s little daughter, Josie, is in danger, because who wants to see a four-year-old in danger? And Lucie has to make a harrowing decision—all in the middle of a life-or-death action scene. Balancing the action and emotion when my own heart was ripping—well, not easy to do.

My villains are always the most challenging. It’s so tempting to make them mustache-twirling caricatures, and finding their humanizing—even their endearing—qualities can be challenging.

I’d love to be Lucie Girard, the heroine of Until Leaves Fall in Paris. Not only does she own a bookstore in Paris, but she’s a former ballerina and a free spirit. She performs puppet shows for children in her bookstore, wearing her pointe shoes so she can move freely. She’s unashamed of her artistic spirit and brings it out in others.

Do you have a favorite under-appreciated novel?

Jane Austen’s Persuasion is one of my favorites, although not as popular as Pride and Prejudice or Sense and Sensibility—which I love! Anne Elliot’s regret for past actions and quiet longing for what might have been really speak to me.

Spreadsheets. I’m really good with spreadsheets. My daughter’s an accountant, and we have really odd conversations about Excel.

Tea—hot or iced, no sugar, thank you very much. So calming.

Oddly enough, coming up with new story ideas. Every three years when it’s time to put together a new proposal, I struggle. It certainly keeps me humble.

Thank you so much for joining us today, Sara.

Below is a Sneak Peek at Sara’s latest release UNTIL THE LEAVES FALL IN PARIS.
(Releasing Feb. 1st) 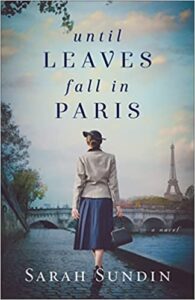 In a recent review, Booklist stated that Sarah Sundin’s “novels set the gold standard for historical war romance.” Her thorough research interspersed with a perfect blend of romance have made Sundin a favorite among historical fiction readers. Based on real-life events, Sundin’s newest novel, Until Leaves Fall in Paris, immerses readers into the midst of World War II where the cost of resistance is high and danger lurks at every turn.

American ballerina Lucie Girard loves performing with the Paris Opera Ballet. But when the Nazis invade France in 1940, Lucie finds she must focus on a different career path. She purchases her favorite English-language bookstore, Green Leaf Books, to allow the Jewish owners to escape. She also joins the French resistance and is able to aid their efforts by passing messages hidden between the pages of her books.

Recent widower Paul Aubrey is determined to leave France and return to the states with his daughter, Josie. But the US Army convinces him to keep his factory running and obtain military information from his German customers. However, accepting this role also means that he will be viewed as a collaborator.

Lucie and Paul’s paths cross when he brings his daughter to Green Leaf Books. Although both are intrigued by each other, Lucie rejects him when she discovers that he is selling to the Germans. Paul longs to tell her the truth, but to win her trust would mean betraying his duty. Can Paul and Lucie work together for the higher good? Or will it cost them everything they love?

Sarah Sundin is the bestselling author of When Twilight Breaks and several popular WWII series, including Sunrise at Normandy, Waves of Freedom, Wings of the Nightingale, and Wings of Glory. Her novels have received starred reviews from Booklist, Library Journal, and Publishers Weekly, as well as the Carol Award, the FHL Reader’s Choice Award, and multiple appearances on Booklist’s “101 Best Romance Novels of the Last 10 Years.” Sarah lives in Northern California. Visit www.sarahsundin.com for more information.