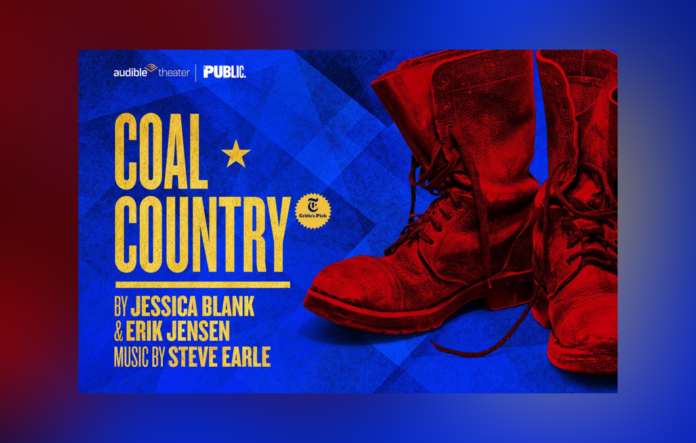 Directed by Jessica Blank, Coal Country’s world premiere run opened as a New York Times Critic’s Pick on March 3, 2020. Before an untimely closing in the face of the pandemic, The New York Times called it “devasting and heart-wrenching,” The Hollywood Reporter said it is “political theater of the most lucid, urgent, and necessary kind, given soaring emotional heft by Steve Earle’s songs,” and The New Yorker praised it as “an outstanding, outraged, life-filled documentary play.”

In September 2021, Audible recorded and released the play, with the majority of the original cast, as an Audible Original (available here), giving the riveting documentary play new life and extending its reach to millions of Audible listeners around the world.

Produced by Audible, Coal Country will return to the stage at the Cherry Lane Theatre (38 Commerce Street, NYC), beginning previews Friday, March 4, 2022 and opening Thursday, March 10, 2022. Opening night will mark 2 years to the day that the original production shut down as a result of the COVID-19 pandemic. Audible Theater also continues to operate its home at the Minetta Lane Theatre, where Robert O’Hara’s reimagined production of Eugene O’Neill’s Long Day’s Journey Into Night is currently in previews.

“We are thrilled to be able to give Coal Country another run and for audiences to get to see this incredible play,” said Kate Navin, Artistic Producer of Audible Theater. “It was heartbreaking to see this show close at the start of the pandemic. To then to have been able to share it with audiences through the audio release was incredible and to now be bringing it back to the stage, just feels right.”

“As we wrote in American Theatre Magazine when Coal Country was shut down by the pandemic: There are stories that have work to do in the world; work that’s bigger than any individual writer, director or performer. Our job as theatre makers is to hold space for that work to happen, even under the most challenging of circumstances” said creators Jessica Blank and Erik Jensen. “Coal Country is the story of 29 lives needlessly lost and those that they left behind. It’s about the power of our common humanity in the face of unimaginable grief and injustice; and, we hope, it’s about bridging seemingly insurmountable differences to help forge a more just nation. We are honored to be partnering with Audible, the Public Theater, and Steve Earle once again to shine a light on what we believe was an avoidable tragedy and the brave souls who survived it.”

“We’re proud to join forces with The Public Theater to bring this vital story and stellar cast back to live audiences,” said Audible Founder and Executive Chairman Don Katz. “Oskar Eustis was a founding member of Audible’s theater advisory board five years ago, and Audible’s deepening alliance with The Public will allow us to draw the best art from society’s most creative people and project it beyond the stage to millions of listeners around the globe.”

“This production of Coal Country has never been more important than it is now. A country so deeply divided needs to have stories that can bond all working people, North and South, Black and white, urban and rural, together in their shared humanity,” shared Oskar Eustis, Artistic Director of The Public Theater. He added, “Coal Country is brilliant, powerful, truthful, and deeply, deeply moving. We were proud to develop it at The Public Theater and shepherd it through its opening at The Public. That run was cruelly cut short by the pandemic. We are thrilled that Audible has brought back this masterpiece to the Cherry Lane, to give a wider audience a chance to see this vital work. Our relationship with Audible has been growing and deepening for years, and this is a major step in our collaboration, one that I think will bear beautiful fruit in the years to come.”

Jessica Blank and Erik Jensen, the creative minds behind the award-winning docudrama The Exonerated, bring their signature style to this strikingly innovative New York Times Critic’s Pick that delves into the aftermath of the West Virginia mine explosion of 2010, highlighting the indomitable resilience of an American community on a quest for justice.

Featuring the musical talents of three-time Grammy Award winner Steve Earle (the Audible Original (The Moment in) 1965 (When Rock and Roll Becomes Art), Coal Country powerfully combines the country/folk legend’s “soaring emotional heft and superbly evocative string-picking” (The Hollywood Reporter) with actual first-person accounts from survivors and family members, immortalizing their stories of survival in this soulful yet resolute tribute.

TICKETING INFORMATION Tickets are on sale beginning today for Audible subscribers and Public Theater supporters. The pre-sale period runs through Wednesday, January 26 at 9:59am ET.

Beginning Wednesday, January 26 at 10:00am ET, single tickets are on sale to the general public at www.coalcountrymusical.com.

HEALTH & SAFETY INFORMATION Audible Theater values the health and safety of its theatergoers, employees, and performers. All attendees must show proof of vaccination and wear a mask. For more information on the Cherry Lane Theatre’s COVID policy, cherrylanetheatre.org/covid-19-protocol.

ABOUT THE PUBLIC THEATER THE PUBLIC continues the work of its visionary founder Joe Papp as a civic institution engaging, both on-stage and off, with some of the most important ideas and social issues of today. Conceived over 60 years ago as one of the nation’s first nonprofit theaters, The Public has long operated on the principles that theater is an essential cultural force and that art and culture belong to everyone. Under the leadership of Artistic Director Oskar Eustis and Executive Director Patrick Willingham, The Public’s wide breadth of programming includes an annual season of new work at its landmark home at Astor Place, Free Shakespeare in the Park at The Delacorte Theater in Central Park, the Mobile Unit touring throughout New York City’s five boroughs, Public Forum, Under the Radar, Public Lab, Public Works, Public Shakespeare Initiative, and Joe’s Pub. Since premiering HAIR in 1967, The Public continues to create the canon of American Theater and is currently represented on Broadway by the Tony Award-winning musical Hamilton by Lin-Manuel Miranda and Girl From the North Country. Their programs and productions can also be seen regionally across the country and around the world. The Public has received 59 Tony Awards, 184 Obie Awards, 55 Drama Desk Awards, 58 Lortel Awards, 34 Outer Critic Circle Awards, 13 New York Drama Critics’ Circle Awards, 58 AUDELCO Awards, 6 Antonyo Awards, and 6 Pulitzer Prizes. publictheater.org