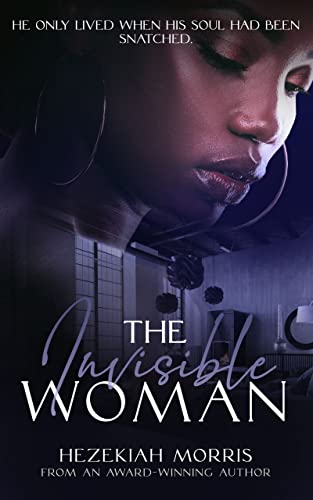 THE INVISIBLE WOMAN BY HEZEKIAH MORRIS

Two years had gone by since Morris Clarkson last stepped foot into Freewater. While the town remained the same. Still from the shops and parks to the residential areas, everything felt like a ghost of what was once there—where Morris found himself lured into a salacious and secretive relationship with a tempting and fierce beauty, Delilah Fowler. Even now, the thought of that burning desire and love for that woman was the main reason he returned to Freewater.

Of course, that woman wasn’t here in Freewater anymore. She was murdered in her own loft, and despite how crazy Morris sounded to his friends, he moved right into that same loft. Whether it was lovesickness wearing him down, or just the need to relive that fantasy, Morris didn’t care about the odd rumors about a ghost dwelling in the loft. Until it turns out the rumors were try. Morris encounters the ghost of a woman on the same day he moved in; a woman who looked, talked and moved like Delilah.

Caught up in passionate and lustful memories of the past, and the vivid yet carnal dreams plagued by the spirit of Delilah, Morris wants nothing more than to embrace that deathlike whispering calling him to the edge. Regardless of his attempts to fight back, and knowing something is wrong, despite feeling so right, about the ghost in this game of seduction, Morris has a choice to make. Either move on or embrace the inevitable. Even if it meant that Delilah might snatch more than his body in the end.

Hezekiah Morris is a 43-year-old alpha male and Award-Winning Author. His leadership skills have been apparent from childhood. He was born in Appomattox Virginia. He now resides in Lynchburg, Virginia. Hezekiah has one brother and one child, Kyla Israel. Despite his trials, Hezekiah graduated Magna Cum Laude from Skyline College in the Computer Engineering Program with a 3.7 GPA and made the Dean’s list. He is currently a Material Handler/Machine Operator with hopes of pursuing a career as an ordained minister, with a concentration in counseling. Hezekiah enjoys reading, sports, and spending time with his family. Hezekiah’s dream is to enlighten and empower as many troubled youth and adults as possible by sharing his story. He wants everyone to know that anyone can change and that life gets better through faith in Christ. Perhaps the most important truth that the reader should be aware about Hezekiah Morris is that he has a compelling story to tell that can change the lives of young urban dwellers. Hezekiah didn’t come from privilege but never felt entitled – like the world owed him something. In fact, he felt like he owed those who struggle through life. He tells his story with authenticity, without holding back the truth and tells it in graphic detail.