Do you ever doubt yourself? Wonder whether you’re worthy? Think about how you are accepted by family and friends? Do you see your friends doing the same and wonder why? I have had those doubts myself throughout my entire life. To be honest, society planted some of those insecurities within me. I couldn’t light the candles on our church’s altar because I was a girl. Every man I knew, from the janitor at my grammar school to a contractor who’s currently doing work on my house, has called me dear/honey/sweetie and thought me dumb because of the color of my hair. I believed that I was inferior and dumb, and I believed the strong parts of my personality—my tendency to speak my mind about social justice issues and my blunt honesty (open mouth/insert foot)—should be squelched, because they weren’t nice. I never truly accepted myself, all the parts of me, the ones that society deemed “good” and “bad.” But now, I believe that most of us experience insecurities and that knowing and celebrating the world’s goddesses can help alleviate those negative thoughts.

Conducting the research for my latest book, You Are Divine: Searching for the Goddess in All of Us, was an intrepid inward journey, because I discovered that being divine doesn’t mean you have sprouted wings and can change water into wine. Instead, it means you embrace the feminine aspects of your personality and that you respect those traits in others, as well. I found pieces of myself in several goddesses, and that discovery finally helped me celebrate all of the aspects of myself.

Here are six ways that you, too, can find and celebrate the goddesses within you.

Now, more than ever, is the right time to celebrate those goddesses and heavenly beings that have been part of most cultures (though often ignored) for centuries, some for thousands of years. The chatter I hear from women about the world around us tells me that I am not alone in wanting to recognize a power that is more aligned with my emotions and beliefs and sensitivities.

Think about the traits you share with goddesses. Those traits are divinely feminine and you are the goddess. You are divine.

HERE’S A LOOK AT DAWN’S LATEST RELEASE:: YOU ARE DIVINE 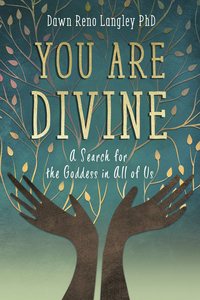 Every woman holds the divine feminine within her, but sometimes it can be hard to find inside ourselves. Dawn Reno Langley delivers the advice that goddesses offer us, as well as how we can incorporate those lessons into our daily lives. With powerful interviews and journaling prompts, Langley invites you to find your inner strength, let go of the expectations of society, and embrace your own divinity.

You Are Divine is a celebration of all women, sharing inspiring stories of divine female archetypes from different cultures across the globe. It features powerful examples of mythological, historical, and contemporary women who represent the best qualities in all of us. With this book, you can discover your unique way of taking back power, calling for justice, connecting with your creativity, exploring ecofeminism, and so much more.

Dawn Reno Langley, PhD, (Durham, NC) is a writer, social justice activist, TEDx speaker, and Fulbright scholar. She holds an MFA from Vermont College and a PhD from the Union Institute and University. She has taught classes on women’s issues, spoken publicly about her own spiritual journey, and has published more than thirty books.