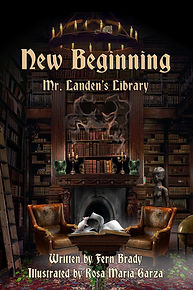 Tired of the burden being the keeper of the special collection volumes has put on him, Mr. Landen takes drastic measures to ensure no one else is hurt. Will the new heir do a better job?

Fern Brady is the founder and CEO of Inklings Publishing. She holds multiple Masters degrees and several certifications. She began her professional life as a foreign correspondent, and taught for 15 years in Alief ISD. She has published numerous short stories, two children’s picture books, and a couple of poems. Her debut novel, United Vidden, which is book one in her Thyrein’s Galactic Wall Series, received an enthusiastic reviewed by Dr. Who online. She is the current president of the Houston Writers Guild, with whom she served in that capacity previously.

Besides being Municipal Liaison for Nanowrimo Houston, she is also a member of American Book Publishers Association as well as of Blood Over Texas and Romance Writers of America.  She is co-hosts two podcasts: Author Talk and The Hot Mess Express. She lives in Houston, TX, with her parents and her talkative husky, Arya. Follow Fern’s writing at: www.fernbrady.com

Rosa Maria Garza is an illustrator for Inklings Publishing and is available for freelance opportunities as well.  Her current projects include:
Aztec Rising
Mr. Landen’s Library
Children’s book illustrations
Abel and the Monster Girls