Search
Home Blog THE SCIENCE OF WOMEN IN HORROR 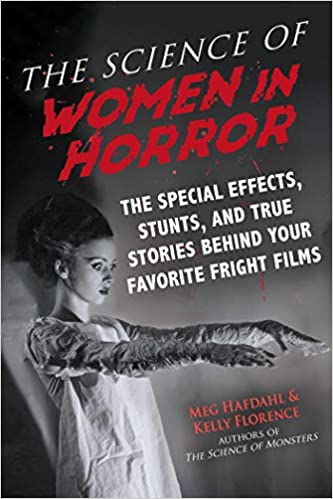 THE SCIENCE OF WOMEN IN HORROR
The Special Effects, Stunts, and True Stories Behind Your Favorite Fright Films

From scream queens to femmes fatale, horror isn’t just for the boys.

Gothic media moguls Meg Hafdahl and Kelly Florence, authors of The Science of Monsters, and co-hosts of the Horror Rewind podcast called “the best horror film podcast out there” by Film Daddy, present a guide to the feminist horror movies, TV shows, and characters we all know and love.

Through interviews, film analysis, and bone-chilling discoveries, The Science of Women in Horror uncovers the theories behind women’s most iconic roles of the genre. Explore age-old tropes such as “The Innocent” like Lydia in Beetlejuice, “The Gorgon” like Pamela Voorhees in Friday the 13th, and “The Mother” like Norma Bates in Pyscho and Bates Motel, and delve deeper into female-forward film and TV including:

“Through the lens of horror, Kelly Florence and Meg Hafdahl take readers on a thought-provoking journey through history and real-life applications on what it means to be a woman. A monstrously feminine and insightful read; the past, present, and future of horror is female.” —Meagan Navarro, genre film journalist, critic, and columnist at bloody-disgusting.com

“The Science of Women in Horror is a well-researched and thought-provoking love letter to women in horror, reflecting on the impact of the influential characters onscreen as well as the women responsible for helping shape the genre behind the camera. Through a series of compelling interviews with female filmmakers, as well as essays exploring the many films that have both shaped and subverted expectations for women in the genre—from the virginal final girl to the vengeful killer, and everything in between—the authors speak to the breadth of the female and female-identifying experience and the impact horror has made on reflecting universal fears while simultaneously redefining female archetypes. It’s a riveting read, shedding an important light on how far we’ve come and how far we still have to go on the road to broader representation and gender parity in film—with horror, as a genre, leading the charge.” —Stephanie Malone, founder and editor-in-chief of morbidlybeautiful.com

“The Science of Women in Horror presents how the everyday horror of the female experience creeps into the movies that have shaped a genre. Meg Hafdahl and Kelly Florence have produced a smart social analysis of horror and how women continue to revolutionize the industry.” —Daphne Strasert, co-author of Horror Bites: Campfire Tales

Horror and suspense author Meg Hafdahl is the creator of numerous stories and books. Her fiction has appeared in anthologies such as Eve’s Requiem: Tales of Women, Mystery and Horror and Eclectically Criminal. Her work has been produced for audio by The Wicked Library and The Lift, and she is the author of two popular short story collections including Twisted Reveries: Thirteen Tales of the Macabre. Meg is also the author of the two novels; Daughters of Darkness and Her Dark Inheritance called “an intricate tale of betrayal, murder, and small town intrigue” by Horror Addicts and “every bit as page turning as any King novel” by RW Magazine. Meg, also the co-host of the podcast Horror Rewind and co-author of The Science of Monsters, The Science of Women in Horror, The Science of Stephen King and upcoming The Science of Serial Killers, lives in the snowy bluffs of Minnesota.