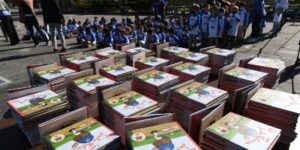 The Los Angeles Dodgers Foundation will facilitate additional readings at various schools in Pasadena Unified School District featuring Dodger personnel. LADF inspires thousands of children by using the Dodgers’ historic brand to motivate young people to read and help them build a life-long love of reading. The organization distributes thousands of free books each year and supports libraries and literacy non-profits doing important work in the community, engaging current and former players to read to children across the city.Each student at the Title I school received their own copy of the book. In total, Penguin Young Readers generously donated 2,000 books to LADF to distribute to the schools in the Pasadena Unified School District , which also included WHO WAS JACKIE ROBINSON? by Gail Herman and Who HQ.