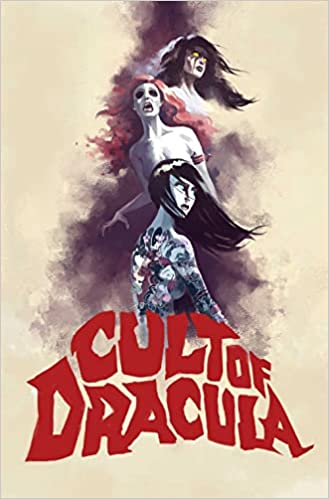 CULT OF DRACULA BY RICH DAVIS

Author Rich Davis is famous for his Cult of Dracula creations. He has also founded a performing arts theater, worked as a concert booker, a film producer, a radio personality, an actor and screenwriter, and a campaign staffer for two Presidential campaigns. Inspired by Bram Stoker (and based on the nightmares of Rich Davis!), this is a tome sized comic book – a series of Dracula inspired horror stories as written by Rich Davis and illustrated by the conjoined talents of Henry Martinez, Trevor Richardson, Ed Dukeshire and others.

Being a comic book, revealing the ‘stories’ would be a disservice to readers, as the tales, bizarre and strange and very dark, need to unfold in the manner of reading comic books. Suffice it to say that the impressions these tales create are both entertaining and lasting – even into the night dreams realm. Davis and colleagues are skilled at bringing out the special pleasure of wedded graphics and stories.

At the end of the book there are a number of ‘variant covers’ – artwork inspired by the content – that are particularly fine. And in closing this experience Rich Davis shares, ‘I want you to know that death isn’t the end of anything. You can live a thousand times only to be born again and again and again. I’m proof of that…Life is energy. Energy can neither be created nor destroyed. That’s science. Life goes on. That’s fact. It’s also a core theme in Cult of Dracula. Dracula lives. Dracula suffers. Dracula dies. Dracula remakes himself ad infinitum. I don’t know if there’s a point to this. I still don’t know if there is a point to Cult of Dracula. Both are nothing more or less than the brutal exploration of tortured souls. Life is suffering. There’s more to come. In my comics and in my existence. Live. Laugh Love. Never say no when someone you love wants one more moment of your time. Don’t go to bed angry. Always say “I love you.” There are a million more of these clichés but [expletive] they’re so true. Take it from a deadman.’

Have fun, shudder a bit (or a lot!) and step into the now infamous comic book world of Rich Davis. Recommended. Grady Harp Review