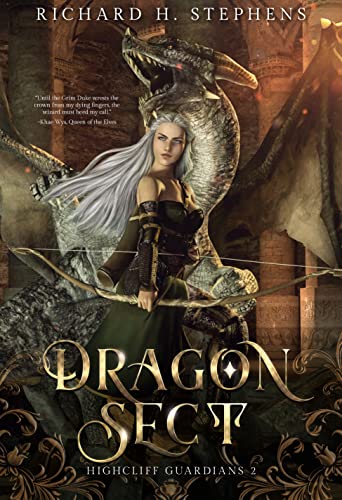 Canadian author Richard H. Stephens has served with the Police Service, the provincial court system, and now devotes his time to his first love – writing. He writes epic fantasies in series – LEGENDS OF THE LURKER (three volumes), SOUL FORGE SAGA (three volumes), BANEBRIDGE COMPANION (three volumes, and HIGH CLIFF GUARDIANS of which DRAGON SECT is Book 2. His books are directed toward the Teen and Young Adult audience.

For those who have not read book 1, Richard has explained ‘the story of the rise of the clandestine society of Windwalkers – a sect of elves who devote their lives to protect powerful sources of magic – a magic so strong that should it fall into the wrong hands, it would spell the end of South March and the lands beyond.’ He includes artworks in the book that enhance the reading experience – as does the colorful quality of prose – “Braen Wys looked up from where he read under the flickering glow of a solitary candle. Something wasn’t right. He gazed around his spacious sleeping quarters in search of the cause of the disturbance. Other than the storm raging outside the bay window beside him, he was met with tomblike silence. As was to be expected. High in the western wing of Urdanya Castle, he wasn’t likely to hear anything in the middle of the night, besides the movement of the Sea Guard patrolling the grand hallways outside his royal chambers… The only thing he could attribute to the unmistakable sense of foreboding gripping him was that his mother, Princess Odyne, was probably dabbling with her dark magic again…’ The fantasy potion opens!

As with the initial volume, the story is lengthy, but appropriately so to cover the realm of action: ‘The Dragon Witch Wraith has returned. With the Grim Duke in his place, and a tentative pact with the wizard’s guild, the Queen of the Elves’ only real concern is for her rebellious daughter. Or so she is led to believe. Buoyed by the news of unrest in the land’s largest city of Urdanya, Duke Orlythe’s new wizard attempts to convince him that a path to the coveted Willow Throne lies within reach of someone bold enough to seize the opportunity. The return of the Dragon Witch Wraith prompts the ailing high wizard to find a way to thwart his arch nemesis before everything South March has fought for is lost. Oblivious to the dangers of the world, Princess Ouderling sets out on a quest to locate an ancient dragon, in a desperate attempt to save her mother from an inevitable fate. Should she fail, the Grim Duke will ascend the throne.’

Well written and rich in imagery and imagination, this second volume of his series makes good on the promise to provide rich fantasy tales to take us away from the conundrums of the day and provide a fine escape.