Throughout folklore, many plants were associated with faeries and a number of them were noted as being especially favored by the fae. Growing even one special plant in your garden can attract faeries and aid you in working with them. Of course, the plants have magical uses and faeries can help guide you.

Including a plant or two in your garden that faeries are fond of shows your interest and sincerity and will help in building a relationship. A garden does not have to be large; it can consist of several flowerpots on a porch or balcony. The important thing is to make it welcoming and special, and they will come.

Build Relationships with Faeries and Connect with Nature on a Deep, Soul Level

The natural world is integral to our spiritual and magical lives and the lives of faeries and nature spirits. With this book, you’ll discover how plants bridge the worlds and help us work with these extraordinary beings. Drawing from folklore, history, and personal experience, Sandra Kynes teaches you all about faery magic and the unique ways that plants enhance your connection to the fae.

This comprehensive guide presents over one hundred profiles of common and obscure plants associated with faeries and nature spirits. Grow bracken fern to attract faeries to your property. Hold a small bundle of vervain to help you communicate with nature spirits. Set out a bowl of blackberries as a token of friendship. With hands-on activities and exercises, this book shows you how to journey to faeryland, conduct dreamwork, and heal both yourself and the planet. 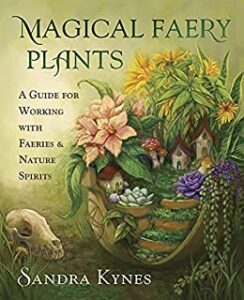 Sandra Kynes (Mid-coast Maine) is a member of the Order of Bards, Ovates & Druids and the author of seventeen books, including Star Magic, Llewellyn’s Complete Book of Correspondences, Mixing Essential Oils for Magic, and Sea Magic. Additionally, her work has been featured in Utne Reader, The Portal, and Circle Magazine. Sandra’s writing also appears regularly in Llewellyn’s popular almanacs and datebooks.