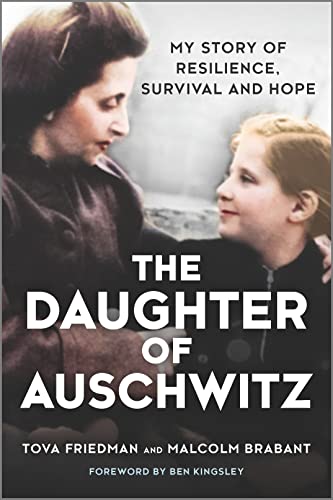 The Daughter of Auschwitz by Tova Friedman, Malcolm Brabant

A powerful memoir by one of the youngest ever survivors of Auschwitz, Tova Friedman, following her childhood growing up during the Holocaust and surviving a string of near-death experiences in a Jewish ghetto, a Nazi labor camp, and Auschwitz.

Tova Friedman was only four years old when she was sent to a Nazi labor camp at the start of World War II. While friends and family were murdered in front of her eyes, the only weapon that Tova and her parents possessed was the primal instinct to survive at all costs. Fate intervened when, at the age of six, Tova was sent to a gas chamber, but walked out alive, saved by German bureaucracy. Not long afterwards, she cuddled a warm corpse to hide from Nazis rounding up prisoners for the Death March to Germany.

In this heartrending, lyrical account of a young girl’s survival during the Holocaust, Tova Friedman, together with Malcolm Brabant, chronicles the atrocities she witnessed while at Auschwitz, a family secret that sheds light on the unpalatable choices Jews were forced to make to survive, and ultimately, the sources of hope and courage she and her family found to persist against all odds.