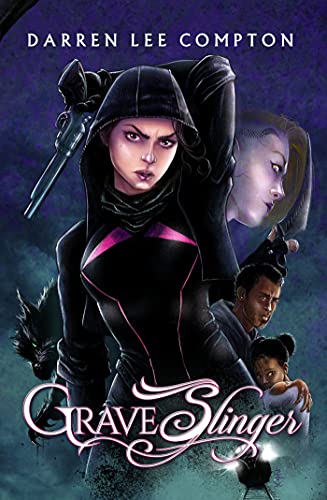 Steeped in the lore of things that go bump in the night, Graveslinger enticed from the very first scene. The vivid language commandeered my senses and imagination and didn’t let go of it until the very last sentence.

The book’s title comes from the main protagonist, Fiya Diaz, a huntress of the undead, as she inadvertently embarks on a makeshift rescue mission against demons and ghouls.

I applaud Darren Compton on his masterful use of descriptive language. He was able to deftly paint pictures with his words that were transportive and seemed to come alive. It enabled me to become fully engulfed by the story and often his ability to engage all the senses, (I swear there were a couple instances where I felt I could smell, taste and hear the words emanating from the pages), made me feel like I was watching a 3-D film with Taste and Smell-O-Vision!

Compton’s ability to describe the demons and ghouls and fight sequences, coupled with his extensive knowledge around weaponry and combat skills (either innately or well researched), ensures a long career for him in this genre, especially as it depends so heavily on the author being able to capture the imagination of their audience, in which Darren Compton showed definite skill. Each of these scenes stood shoulder to shoulder with any action sequence from any episode of Buffy the Vampire Slayer or Supernatural.

Another’ strength of this book lay in the characters. Darren presented multi-dimensional characters, full of layers and subtle reveals. I found them intelligent in their choices and motivations, their sense of humor in the dialogue showed layers that made each character relatable. I especially want to applaud Darren Compton on his injection of Imposter Syndrome with Fiya.

In a story full of supernatural monsters, his comparison between them and human monsters and the link he made to their motivations and free will was an eloquent thesis. He presented this so subtly and succinctly that it led to one of the book’s best AHA moments! His introduction and treatment surrounding the theme of PTSD was also very intentionally delivered which added yet another layer to an already complex plot.

As the first book of a series, Graveslinger was well paced and gave enough back story into the protagonist and the main elements that make up this world. I liked that there weren’t too many unanswered questions, but enough of a cliffhanger to make me want to discover more. A multilayered, vividly written, joyride of a book!

Get it on Amazon || Barne’s&Noble || Author’s site