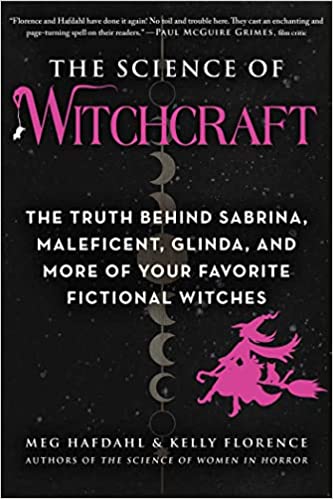 The Science of Witchcraft: The Truth Behind Sabrina, Maleficent, Glinda, and More of Your Favorite Fictional Witches from Kelly Florence and Meg Hafdahl

Kelly Florence and Meg Hafdahl, authors of The Science of Women in Horror and co-hosts of the Horror Rewind podcast called “the best horror film podcast out there” by Film Daddy, present a guide to the history of witchcraft through the stories and characters we all know and love. Reveal the spellbinding science behind the legends and lore surrounding fiction’s most iconic witches, answering such questions as:

Through interviews, film and literary analysis, and bone-chilling discoveries, join Kelly and Meg as they learn about the complicated and rich science of witchcraft throughout the centuries and discover why now is the season of the witch!

The Science of Witchcraft: The Truth Behind Sabrina, Maleficent, Glinda, and More of Your Favorite Fictional Witches: Hafdahl, Meg, Florence, Kelly: 9781510767188: Amazon.com: Books

Horror and suspense author Meg Hafdahl is the creator of numerous stories and books. Her fiction has appeared in anthologies such as Eve’s Requiem: Tales of Women, Mystery and Horror and Eclectically Criminal. Her work has been produced for audio by The Wicked Library and The Lift, and she is the author of two popular short story collections including Twisted Reveries: Thirteen Tales of the Macabre. Meg is also the author of the two novels; Daughters of Darkness and Her Dark Inheritance called “an intricate tale of betrayal, murder, and small town intrigue” by Horror Addicts and “every bit as page turning as any King novel” by RW Magazine. Meg, also the co-host of the podcast Horror Rewind and co-author of The Science of Monsters, The Science of Women in Horror, The Science of Stephen King and upcoming The Science of Serial Killers, lives in the snowy bluffs of Minnesota.