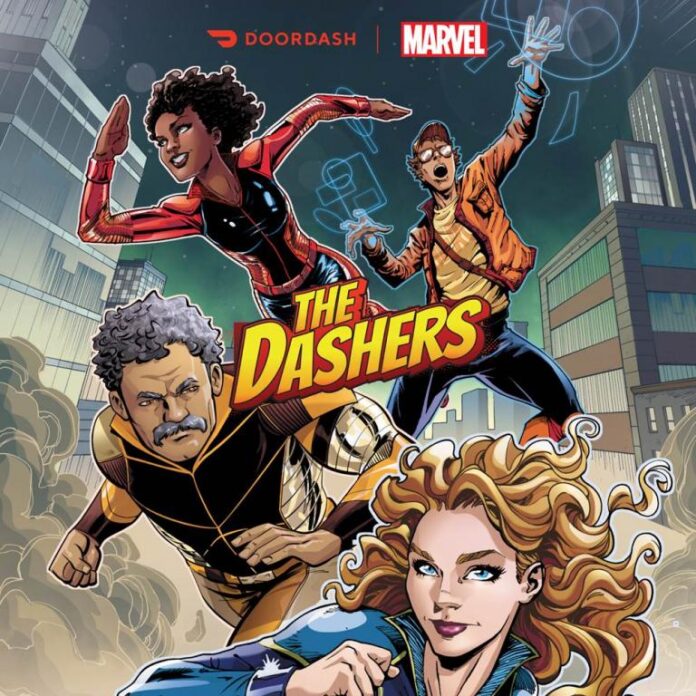 DoorDash and Marvel’s brand partnership and comic book will depict how, through independence and flexibility, Dashers are able to pursue their passions while being real-life heroes in their communities

DoorDash announced a partnership with Marvel Entertainment to create exclusive, custom content inspired by and created for real-life heroes – Dashers. Introduced at New York Comic Con, DoorDash and Marvel worked together to launch a new custom comic book, The Dashers, which celebrates the work and lives of those who deliver with DoorDash. The comic book depicts how, through independence, ingenuity and flexibility, four Dashers are able to save the city of “Dashville” all while pursuing their life goals and passions and delivering for their communities.

The DoorDash x Marvel brand partnership celebrates Dashers, highlighting the opportunities dashing offers them, amplifying the role they play in their communities and illustrating how dashing supports their families, responsibilities, and pursuits.

“We’re thrilled to work with Marvel, the authority on superheroes, to uplift the stories and experiences of Dashers,” said DoorDash Head of Brand Marketing David Bornoff. “The pandemic highlighted the vital role Dashers play in their communities, helping local businesses grow sales and connecting consumers with essential products. The Dashers comic book celebrates the everyday heroism of Dashers and shows how they have the freedom and flexibility to pursue their passions while dashing.”

The Dashers comic book features four super hero characters who each value dashing for a different reason: Ernesto values the ability to explore the city and having different experiences, Julia appreciates being able to earn flexibly while taking care of her family, Remi is an aspiring chef who dashes to support her passion, and Andrew is a young tech-savvy college student who dashes to help buy books and support his education. They each utilize their own Dasher super power – from the ability to be in multiple places at once, or “omnireplication,” to hyper-flexibility, or “supernatural elasticity,” and more – to navigate the city, dash, and ultimately, save the day.

Dashers nationwide, like the characters in the comic book, use dashing to support their passions, spend time with family, and earn on their own terms. Earlier this year, DoorDash released an Economic Impact Report which revealed that 88% of Dasher respondents had other income or responsibilities, which includes Dashers who have a full- or part-time job, are self-employed, students, stay-at-home caregivers or retired.

In addition to the comic book release, Marvel will bring The Dashers to life in a motion comic series that will be released in five chapters. At New York Comic Con, DoorDash will recreate the city of Dashville in an experiential activation. Attendees will be able to test their Dasher super powers and complete challenges to see if they, too, can save Dashville.

Details about the comic book, signing up to dash, and a digital version of The Dashers can be found at doordash.com/marvel.

Chapter one of The Dashers motion comic will be launched October 12 on Marvel’s social media channels and Marvel.com.