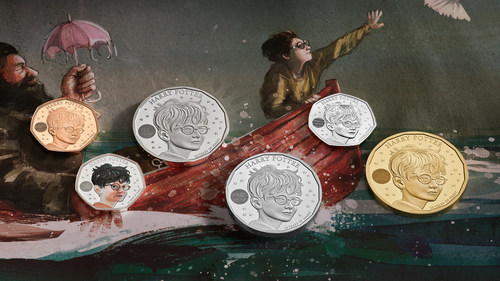 – Other coins in the collection will feature The Hogwarts Express, Professor Albus Dumbledore and Hogwarts School of Witchcraft and Wizardry

The Royal Mint has today launched an official 1oz coin featuring Harry Potter to celebrate 25 years since the novel Harry Potter and the Philosopher’s Stone by J.K. Rowling was first published in the UK in 1997 by Bloomsbury Publishing.

The Harry Potter coin, available on a range of denominations including 1oz, is the first of four coins modelled by Ffion Gwillim at The Royal Mint, which feature the work of Jim Kay, the artist who created the first fully illustrated edition of this Harry Potter story.

Combining traditional minting techniques with technology, The Royal Mint’s craftspeople have faithfully reproduced Jim Kay’s illustrations in colour for the first time on official UK coins. Many of the coins in the range also feature an enchanting ‘latent feature’ which rotates in the light to reveal a lightning bolt and the number ’25’ to mark the anniversary year*. An advanced picosecond laser was used by The Royal Mint to imprint the intricate design onto coin making tools to ensure accuracy, and create an additional, special effect to further enhance the coin’s design.

Nicola Howell, Chief Commercial Officer at The Royal Mint said, “As the official maker of UK coins, we are delighted to make a spellbinding coin collection to celebrate the 25th anniversary of Harry Potter and the Philosopher’s Stone. The first coin in the collection, celebrating Harry Potter, will be available for collectors and fans to buy from today.

“The collection is expected to be in high demand, as it is amongst a small amount which will see a portrait change during the series. Her Late Majesty will feature on the first two coins launching in 2022, while the final two coins in the collection will feature the official portrait of King Charles III in 2023.”

Jim Kay, illustrator and designer of the Harry Potter coin collection commented on producing the coin design, “It hasn’t really sunk in yet. It is the same for most aspects of publishing – because you are on your own all of the time in a studio, none of it quite seems real until you see the book on a shelf in a shop. Then you think ‘oh yeah! I did that!’ This is completely new to me though, a coin!”

Mandy Archer, Editorial Director at Bloomsbury Children’s Books said, “Bloomsbury Publishing is thrilled to see the Boy Who Lived being celebrated in such a glorious way. The Royal Mint’s stunning coins are the perfect souvenir of Harry Potter’s silver anniversary! Jim Kay’s depiction of the wizarding world is unique and extraordinary – we can’t wait to see his work magically move beyond the printed page and onto this enchanting new medium.”

Ffion Gwillim, The Royal Mint designer who modelled the artwork onto coins, said: “The Harry Potter illustrations are so iconic and recognisable, we wanted to faithfully recreate them on a UK coin for the first time. Working with Jim Kay, we’ve created a collection which is a fitting celebration to the original artwork and the iconic story.”

The coin series has been created in partnership with Bloomsbury Publishing, The Blair Partnership and Warner Bros, Consumer Products. The first coin in the collection celebrating Harry Potter is available to purchase from The Royal Mint’s website: Harry Potter | The Royal Mint.