Search
Home Blog A Day in the Life of Phyllida Bright, Housekeeper for Agatha Christie 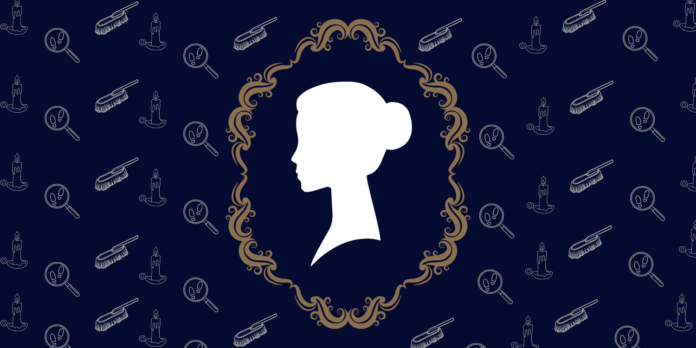 A day in my life starts not quite as early as one might think. After all, since I’m the housekeeper for the spacious Mallowan Hall in Devon, England, and I employ only superior staff, I have no need to rise before half seven. Of course, the kitchen maids, the chambermaids, and the footmen—not to mention the gardener and that irritatingly sardonic chauffeur—are all up at dawn, beginning their day’s work. I’m usually served my tea and a small breakfast in my quarters with my cats, Stilton and Rye. During my morning cuppa, I go over the household accounts and plan any meetings with tradespeople I might have for the day. Mostly, I attempt to avoid Mr. Dobble—the butler and the biggest thorn in my side. Only he ranks higher than I do in the household staff, and he uses every opportunity to lord that over me. The mornings are simply far too early for me to want to deal with him.

You might have heard of my employer. Her name is Agatha Mallowan, but she is known by her writing name of Agatha Christie. Recently, I discovered a dead body in Mrs. Agatha’s library. Since it turned out that the local constable and detective inspector weren’t up to the task of identifying the culprit, it fell to me to do so.

Now, a few weeks later, with the culprit safely behind bars, I went back to my regular tasks and then I took on an extra one: managing an event that’s taking place in the small village near Mallowan Hall. It’s a Murder Fête, and we are hosting both well-known mystery writers like Agatha Christie, Dorothy L. Sayers, and G.K. Chesterton, as well as aspiring writers who are hoping to get some pointers and mentorship from the published authors.

Unfortunately, at the welcome cocktail party, someone drank a poisoned cocktail and they wound up dead…which means I have yet another murder to investigate.

It was quite a challenge—of course, one that I met readily—to manage a household whilst giving a Murder Fête…and, then, all at once, having to solve another murder. Between managing the gossiping maids, a flirtatious valet, the competitive aspiring murder writers (including a rude, obnoxious man who thinks he’s the next Agatha Christie), not to mention the honored mystery writer guests, I found it quite trying. Nonetheless, I did of course persevere, and presented the solution to the entire group of Murder Fête attendees in a denouement speech that even M. Poirot would have appreciated. Now that that’s been put to rest, the only thing I must attend to is making certain Mr. Bradford (the sardonic, surly, annoying, and a little mysterious and certainly not handsome chauffeur) keeps his new puppy out of my house.

Phyllida Bright, housekeeper to the grand dame of murder mysteries, Agatha Christie, must uncover the killer among a throng of crime writers in this sparkling new historical mystery from acclaimed writer Colleen Cambridge.

In England’s stately manor houses, murder is not generally a topic for polite conversation. Mallowan Hall, home to Agatha Christie and her husband, Max, is the exception. And housekeeper Phyllida Bright delights in discussing gory plot details with her friend and employer . . .

The neighboring village of Listleigh has also become a hub of grisly goings-on, thanks to a Murder Fête organized to benefit a local orphanage. Members of The Detection Club—a group of celebrated authors such as G.K. Chesterton, Dorothy L. Sayers, and Agatha herself—will congregate for charitable events, including a writing contest for aspiring authors. The winner gets an international publishing contract, and entrants have gathered for a cocktail party—managed by the inimitable Phyllida—when murder strikes too close even for her comfort.

It seems the victim imbibed a poisoned cocktail intended for Alastair Whittlesby, president of the local writers’ club. The insufferable Whittlesby is thought to be a shoo-in for the prize, and ambition is certainly a worthy motive. But narrowing down these suspects could leave even Phyllida’s favorite fictional detective, M. Poirot, twirling his mustache in frustration.

It’s a mystery too intriguing for Phyllida to resist, but one fraught with duplicity and danger, for every guest is an expert in murder—and how to get away with it . . .