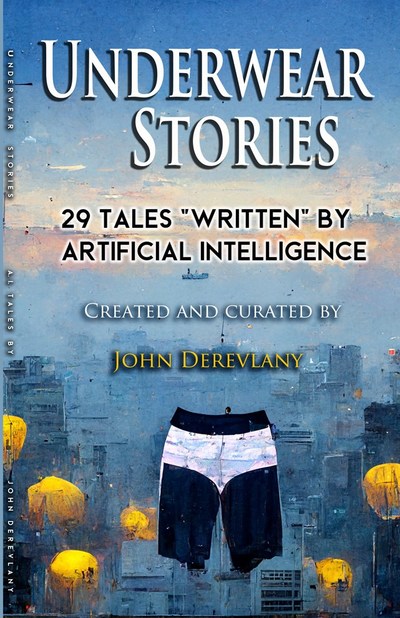 And that word is… “Underwear”

All stories were created by artificial intelligence, and all were based on a single, one-word prompt: “underwear.”

, the creator and mastermind of this project, crafted the tales in “Underwear Stories” with commercially-available A.I. applications that generates content based on text input. The only text prompt given to the machines was the single word: “underwear.”

Derevlany then adjusted the variables on the application to create more than 100 stories, 29 of which made the cut in this book. The main adjustment in variables was a request that the A.I. application write about “underwear” in the specific “voice” of famous authors.

“I don’t completely understand how it works,” says Derevlany. “But it’s pretty cool.  And as far as I can tell, completely legal… for now.”

The more than 30 illustrations in the book were also created by A.I. applications.

Here’s roughly how the A.I. content-generating process works: A.I. applications study enormous quantities of publicly-available material on the internet, and then train themselves to compose written or visual material based on that material, including its stylistic elements. Users then input a text prompt (with or without variables, like “tone of voice”), and the A.I. generates a completely “original” piece of work.

“It’s `original’ in the sense that it never existed before, but it’s clearly inspired by the material that it was trained on,” explains Derevlany. “However, no one creates in a void. All artists, whether human or machine, are always inspired by the styles and works of those before them. This is no different, except for its efficiency and quirks.”

Derevlany notes that the A.I.-generated material is “surprisingly coherent and interesting.  But it still takes a lot of tweaking and trial-and-error to get something that’s book-worthy.”  This is why he generated more than 100 A.I. stories about underwear in order to narrow it down to the 29 in this book.

“Underwear Stories” is now available on amazon.com in paperback and kindle.

Prior to creating “Underwear Stories,” Derevlany created or developed more than 20 TV series for children as a writer and producer.