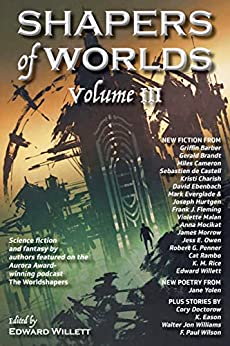 For the third year in a row, Regina publisher Shadowpaw Press (www.shadowpawpress.com) has produced an anthology of science fiction and fantasy stories that includes works from multiple bestselling and award-winning authors from Canada, the United States, and Australia.

All of the authors were guests during the third year of Willett’s Aurora Award-winning podcast, The Worldshapers (www.theworldshapers.com). Among them are winners of and nominees for most of the world’s most prestigious awards for science fiction and fantasy literature.

From outer space to inner space, from realms of magic to the here-and-now, from the distant past to the far future, the twenty-one featured authors take readers on ncredible adventures in the company of unforgettable characters. A pampered, overweight cat from the present saves the world from alien invasion in Ancient Egypt. A musician whose special horn helped bring down the walls of Jericho is fated to bring down walls again and again throughout history. A house ghost is troubled by a new owner who proves unhauntable. Robots programmed to love humanity take the only action they can to save us from ourselves. A CDC agent is prepared to do whatever it takes to prevent a novel pathogen from spreading . . .

Willett is himself an award-winning author of more than sixty books of fantasy, science fiction, and non-fiction for readers of all ages, including eleven novels for New York’s DAW Books. His twelfth novel for DAW, the humorous space opera The Tangled Stars, just came out in ebook and audiobook formats. In The Worldshapers podcast, Willett, a former newspaper reporter and editor and radio and television host, chats with other science fiction or fantasy authors about their creative process.

Shapers of Worlds Volume III, like the previous two volumes, was Kickstarted, raising more than $16,000 CDN in pledges. It is available through all major retailers as well as directly from Shadowpaw Press.