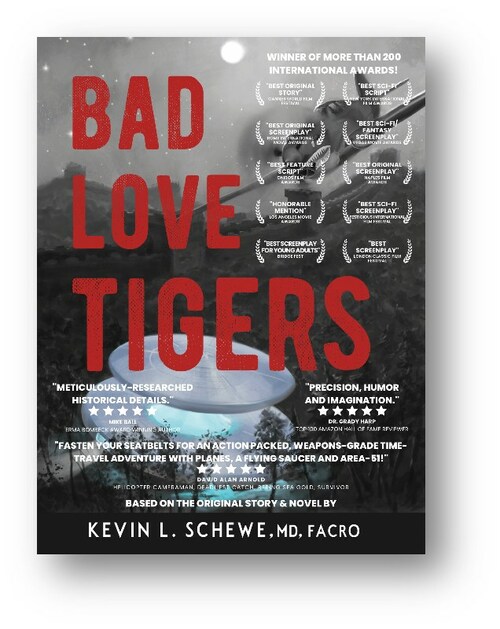 “The Bad Love Gang and I are honored beyond words with this far-reaching global recognition. We are actively seeking interested Producers, Studios and Directors. We have assembled a ‘look book’ with a wish list of actors and a comprehensive multimillion dollar budget down to the most minute details, including comparable film financial performances,” said Schewe.

Schewe’s Bad Love Tigers is a feel good, action-adventure, sci-fi blend of Raiders of the Lost Ark meets Stand by Me. The screenplay has strong youth appeal and great potential to attract an audience of all ages back to the big screen. This incredible display of worldwide interest has proven that Bad Love Tigers is already a global phenomenon, crossing cultures and borders and demonstrating its potential to be that feel-great-again, big-screen, tent-pole blockbuster franchise.

Bad Love Tigers, is about a misfit group of young adventurers, known as the Bad Love Gang, who come of age as they use a time-travel machine called the White Hole Project to travel back to the World War II era, meet with President Roosevelt and embark on a perilous secret mission to protect an alien spaceship and defeat the Japanese in combat. Keeping America’s most important and deepest national secret safe at Area-51 hinges on the success of their quest.

About: Kevin L. Schewe, MD, FACRO, is a board-certified cancer specialist who has been in the private practice of radiation oncology for nearly 35 years. Visit Schewe on Instagram @realkevinschewe and KevinSchewe.com and watch the book trailer here. Bad Love Tigers is available on Amazon.