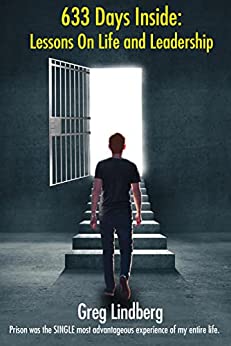 “My 633-day stay in a federal prison was the single most positive transformational event of my life,” Lindberg wrote.

or entrepreneur and philanthropist Greg Lindberg, the year 2022 was one of the most important of his life. The U.S. Fourth Circuit of Appeals reversed his wrongful conviction for bribery and he was released from a federal prison camp after two years in custody. Mr. Lindberg documented his time in custody by publishing his second book, “633 Days Inside: Lessons on Life and Leadership,” which explored the time he served at Federal Prison Camp Montgomery in Alabama.

In his new book, Mr. Lindberg described how shocking his body with changes in diet, sleep and exercise reversed the aging process, transformed his health and helped him not only survive, but thrive, while serving time for a wrongful conviction.

While at the prison camp, Mr. Lindberg discovered the benefits of hormesis, which is the adaptive response of human cells to moderate and usually intermittent stress. For Mr. Lindberg, this meant long periods of fasting, freezing cold showers, extraordinary physical exertion and rigorous mental challenges. Mr. Lindberg said his gray hair turned red again, his memory improved, he added muscle and stamina.

While Mr. Lindberg is grateful to be free, he understands the appellate process took almost two years and millions of dollars. Very few people have the ability to pay for a legal defense, something Mr. Lindberg learned firsthand while interacting with inmates in Montgomery.

“633 Days Inside: Lessons on Life and Leadership,” describing his time at Federal Prison Camp Montgomery can be downloaded at http://www.greglindberg.com or purchased on Amazon and Barnes and Noble.

About Greg Lindberg. Greg Lindberg is an entrepreneur, a leadership coach, an author, and a father. Over the course of his career, he has acquired and transformed more than 100 companies that were either failing or underperforming, each time finding and empowering great talent—people with the same commitment to hard work, learning, entrepreneurship, and a roll-up-your-sleeves attitude. Today, these companies are worth billions of dollars and employ 7,500 people. In 2020, he founded Interrogating Justice, a non-profit organization whose mission is to bring awareness and help advance solutions that hold corrupt government actors accountable, ensure fairness in sentencing, support reentry, and provide access to justice for all. To learn more visit: https://interrogatingjustice.org/