A few things about me:

I live in Montclair, NJ, with my wife, Jalaire, and son, Henry. Two other sons, Jack and Aidan, are away studying.

We live in a split-level house. One Realtor referred to it as a “starter.” We have two cats, Rocksand and Thome. I can walk to the train or bus stop for access to New York City. (Bus takes about 25 minutes in the best of times.)

Until November of 2009, I was a senior writer covering technology for BusinessWeek. When the company went up for sale, in the summer of ’09, I positioned myself for the exit. Now I’m freelancing and writing the next book.

We moved here from Paris (Rue Oswaldo Cruz, 16th ar.) in 2002. We lived there for four years. I used to run in the Bois de Boulogne. (It was a wonderful time to be earning dollars in France.) 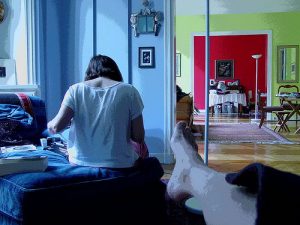 Our apartment in Paris, featuring my right foot and Jalaire’s back. I was just starting with the digital camera and was a little too eager with the solarized look. But in this shot I like what it does to Jalaire’s blouse.

At the very end of my book leave, in June of 2007, I rode my bike from Frank Lloyd Wright’s Falling Water, near Pittsburgh, to Montclair, stopping en route at Gettysburg. (I’d like to get another book leave so that I can bike the Oregon Trail.)

I started at BusinessWeek as the Mexico City bureau chief. My whole schtick back then was Latin America. I’d worked in Venezuela and Ecuador, and at a paper, the Herald-Post, in El Paso.

I was working in Pittsburgh, covering steel, when I noticed that the magazine was giving me very little space for my stories. When I started writing about software and the robots at Carnegie Mellon U., they got more generous. That was when I moved into technology.

My favorite novel, at this moment, is Richard Ford’s Independence Day. I also love John Updike’s Rabbit series. Earlier in my life, I used to say that my favorite novels were Julio Cortazar’s Rayuela (Hopscotch) and Thomas Mann’s Magic Mountain. I think I used to be more intellectual than I am now.

I wrote a novel that takes place on the border between El Paso and Juarez. It’s called Donkey Show. Haven’t published it (yet). Now that I think about it, maybe I should post a chapter or two on this blog…

I decided to become a journalist when it became clear that fiction-writing wasn’t going to earn me a nickel. (The stories I wrote in my early 20s managed to be both pretentious and shallow at the same time, which is actually not an unusual combination.) I was living at my parents’ house in Philadelphia, earning money doing yard work and taking care of my infant nephew. And my mother told me one day that I would never find a job in journalism without looking a bit more actively. About a week later I got a call from a friend. There was a job at a weekly in Ludlow, Vermont, the Black River Tribune. Was I interested? That was my step into the trade.

After I worked at a paper in Venezuela for a year in the mid 80s, I thought I was finally ready for a large U.S. daily, one big enough to send me abroad. I applied in Miami and Dallas. They had loads of Spanish-speaking foreign correspondent wannabes on staff. Here’s how it works, they told me: You go to a suburban bureau, cover school boards and fires and crime. If you do well, you get a job at the metro desk. And eventually, you might get a foreign assignment (but probably not). I went instead to the El Paso Herald-Post, not a great newspaper by any stretch, but lots of great colleagues and a wonderful and wacky city for news. After a year there, I got the job as BusinessWeek’s bureau chief in Mexico City. 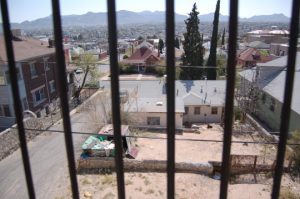 A view from the El Paso neighborhood of Sunset Heights across the border to Ciudad Juarez, Mexico

I grew up in Rosemont, Pa., outside of Philadelphia, and went to Harriton High School. (I include this just in case any old classmates are wondering if I’m the same Steve Baker they vaguely remember.)

I used to play the clarinet in grade school. I took it up again for three years in Mexico. I also scratch at the guitar. But I think at this point, I’m better off saying that I don’t play any instruments.