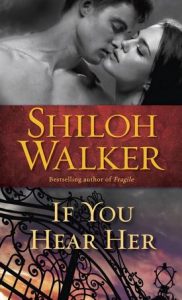 Read the Excerpt, Comment Below, and Come Back 10/31 to see if you Won the Book Giveaway!

If You Hear Her by Shiloh Walker

“What I’m telling you is that there’s not much else we can do at this point.  There is only so much we can do when one woman claims to hear screaming, but nobody reports it, and our searches turn up nothing unusual.”

The heels of his shoes thudded dully against the floor and then stopped.  “Ms. Riddle, around here, we work.  We don’t have time to chase down every little imagined problem, spend hours following up just because one person insists she heard something weird —”

“Actually, that kind of is your job.”

A new voice.  A deep, low rumble of a voice—and very, very familiar.   Pretty much the last voice she would have expected to hear.  Narrowing her eyes, she turned her head toward the sound of the voice.  “Ezra King.”

Don’t you ‘Hello, Lena’ me, she almost snapped.  She managed to bite it back simply because she didn’t want him to know she’d been looking forward to him calling her…like he’d said he would.

“Oh, I’m just peachy,” she drawled, resisting the urge to cross her arms over her chest.  Just the sound of that low, sexy drawl had her body doing bad, bad things.

Sexy, so damned sexy, the sort of voice a woman wants to hear murmuring in her ear during just the right moment—hell, with that kind of voice, any moment would be right.

A phone call would have been nice.

But he never called—

Congratulations to the Giveaway Winners:

Welcome Lynn, we’re excited to have you on Reader’s Entertainment. First, tell our readers a bit about yourself. Where you’re from, where you live?...
Read more