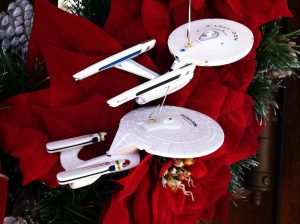 It’s easy to forget what Christmas is all about. We get caught up in shopping and running around and sending cards, but what does it all mean? Why does America celebrate Christmas? Millions of people who aren’t Christians still exchange gifts and decorate their homes. For some, Christmas is a time to celebrate family and friends without a religious overtone. America is a nation of people of different faiths coexisting with one another. It’s what America’s all about. It’s why we live here. I’m a Christian and I’m respectful of those who don’t believe as I do. My reason for celebrating Christmas is both personal and unique.

When I look at the Star Trek ornaments my wife and I hang on our tree every year, they bring back strong memories. My three brothers and I would watch the original episodes of Star Trek together. By today’s standards, the color picture on our cathode ray tube television which used rabbit ears to receive an analog broadcast signal, was downright hideous at best, unwatchable at worst. Back then, we loved it because it was all we knew.

When Star Trek premiered in 1966, I was eight years old. Eight is a wonderful age—we’re beginning to see the real world and realize that Santa Claus doesn’t come down the chimney with a bag of gifts. Back then, I knew the world of Star Trek wasn’t real, but it didn’t diminish the magic of Gene Roddenberry’s amazing vision. The idea of being transported from one place to another in just a few seconds was the coolest thing imaginable. Phasers were awesome, so were tricorders with their warbling whistles. The sounds of Star Trek were just as imaginative as the devices. I liked the multicolored lights on the bridge that didn’t represent anything and I liked how sparks flew from the bridge consoles when the ship was attacked. I remember an episode where Sulu was being tricked into thinking there were giant daggers outside the ship and a change of course would destroy the Enterprise. Special effects were in their infancy and looked cheesy but we didn’t care because we knew Captain Kirk would save the ship, get the girl, and secure the Federation. My oldest brother, Daniel, would record the episodes on cassette tape and listen to them at night in bed. I borrowed them for the same reason.

I often think back on how far Hollywood has come in forty-six years. Plot aside, the movie Avatar blew me away. The night world of Pandora is nothing short of astounding.

I grew up reading science fiction. I must’ve read R IS FOR ROCKET a dozen times. I cut my teeth with Ray Bradbury, Isaac Asimov, and Arthur C. Clark. These authors took me to alien worlds. Watching Star Trek episodes and getting my first glimpses of alien worlds was a thrill I shared with my brothers.

I didn’t know I was going to be an author. If you had told me I’d end up writing thrillers for a living, I might’ve laughed. I’m certain my love of Star Trek played a role in forming who I am today, and I’ve shared that conviction with my wife. So the next time you see something that triggers a cherished memory, explore it a little and don’t be afraid to share it with loved ones.

FIRST TO KILL was Andrew Peterson’s debut novel in September 2008. On his book signing

journey, Andrew visits VA hospitals, and is active in the USO. He’s donated over 2,000 books to our troops serving overseas and to our wounded warriors recovering in Naval and Army hospitals worldwide. Andrew is currently working on his third Nathan McBride novel and the film rights to his books have recently been optioned by Hollywood.