End of the Year, End of an Era – Newsweek Magazine to Cease Publishing 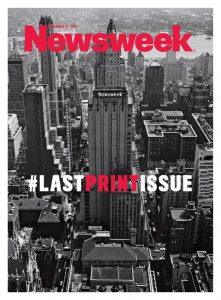 As another year ends, it is only appropriate that RE should report on the end of an era. The iconic Newsweek Magazine has released it’s last print issue.

Citing sagging subscriptions and reduced advertising, the 80-year old publication has decided to go completely digital. Financially, the magazine lost over $22-million this past year, and 16% of it’s advertising base.

Their new digital magazine will feature a new name; Newsweek Global, launching in early 2013 and will be available on most eReaders, tablets and mobile phones.

Newsweek had merged with the digital magazine DailyBeast in 2010, without improved sales. The change to an all digital format will likely bring about a restructuring by the publisher, and could result in substantial layoffs.

Publishers are hoping going digital will boost subscriptions and save the magazine. Tina Brown editor of Newsweek, posted this press release:

“In our judgment, we have reached a tipping point at which we can most efficiently and effectively reach our readers in all-digital format. This was not the case just two years ago. It will increasingly be the case in the years ahead.

This decision is not about the quality of the brand or the journalism–that is as powerful as ever. It is about the challenging economics of print publishing and distribution.

Newsweek is produced by a gifted and tireless team of professionals who have been offering brilliant work consistently throughout a tough period of ownership transition and media disruption. Regrettably we anticipate staff reductions and the streamlining of our editorial and business operations both here in the U.S. and internationally.

Exiting print is an extremely difficult moment for all of us who love the romance of print and the unique weekly camaraderie of those hectic hours before the close on Friday night. But as we head for the 80th anniversary of Newsweek next year we must sustain the journalism that gives the magazine its purpose–and embrace the all-digital future.”

With essays by former editors and writers, as well as a history of the magazine, the last print edition is likely to become a bittersweet collectors item.