Maisie Danger Brown just wanted to get away from home for a bit and see something new. She never intended to fall in love with a boy at space camp. And she certainly never intended to stumble into a frightening plot that just might destroy everything and everyone she cares about. But now there’s no going back. Maisie’s the only thing standing between danger and annihilation. She must become the hero the world needs, before she loses her heart . . . and her life. Learn more about this book here, http://bit.ly/1aHLbXQ 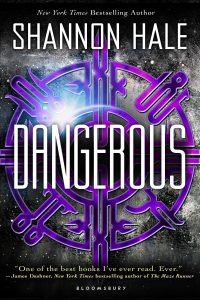 New York Times best selling author Shannon Hale started writing books at age ten and never stopped, eventually earning an MFA in Creative Writing. After nineteen years of writing and dozens of rejections, she published The Goose Girl, the first book in her award-winning Books of Bayern series. Book of a Thousand Days, a standalone novel for young readers, is a Cybils award winner. Princess Academy won a Newbery Honor and is followed by best seller Princess Academy: Palace of Stone and an upcoming third book in the series. Her books for the adult crowd are Austenland (now a major motion picture), Midnight in Austenland, and The Actor and the Housewife. With her husband Dean, Shannon wrote two graphic novels: Rapunzel’s Revenge, winner of the Pacific Northwest Young Readers Choice Award, and its acclaimed sequel, Calamity Jack. Her latest, Ever After High: The Storybook of Legends, will publish October 2013. Shannon’s books have been translated into many languages and studied in classrooms from elementary schools to universities. She spends her days as a stay-at-home mom to four young children near Salt Lake City, Utah.