There’s nothing more exciting than the unexpected!  And Rhenna Morgan’s Unexpected Eden is about to excite readers! Especially with a great give away!!! 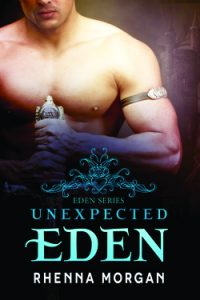 Most people believe Eden no longer exists. Lexi Merrill’s about to learn they’re wrong. A hard-working bartender with a self-sufficient backbone and a wary nature, she knows pickup lines like a second language. So, when Eryx Shantos barges into her world with too-smooth words and a body to back it up, she locks up her libido and vows to keep her distance.

Eryx has other ideas. As king of the Myren race, Eryx is duty-bound to enforce the laws preventing exposure of their existence to humans. Yet The Fates have led him through his dreams to Lexi, a temptation he doesn’t want to resist. The question—is she Myren, or human, which makes her forbidden fruit?

When Eryx’s nemesis tags Lexi as his next target, Eryx insists on taking her home where he can keep her safe. Lexi had no idea “home” would mean the one-and-only land of creation…or that she’d trigger a prophecy that could doom her newfound race.

Slow breaths in, slow breaths out. All Lexi had to do was focus on the thump of Rihanna’s latest hit, keep the drinks flowing, and stick to her half of the bar. The mother lode of testosterone on Jerry’s side couldn’t sit there all night. Could he?

“Don’t suppose you’ve noticed, but there’s a scrumptious not-from-around-here type giving you the eyeball.” Mindy grinned and handed over the latest round of drink orders.

“Drop it, Mindy. Guys like that are an occupational hazard and you know it.”

“Honey, that man is way past hazard. More like Chernobyl.” She leaned into the trendy concrete countertop. The modern pendant lights spotlighted her platinum hair and ample cleavage. One thing about Mindy—she knew how to work her assets. “I’ll bet the fallout’s worth it.”

“It’s packed tonight. You gonna get those drinks out and stash a few tips, or waste ’em on eye candy?”

Mindy’s dreamy smile melted and she pulled the loaded cocktail tray close. “All work and no play, huh?” She shook her head and turned for the crowd. “Have fun with that.”

Well, hell. Another social interaction down the toilet. At twenty-five-years-old, you’d think she could handle a little female bonding in the form of man-ogling. Especially when four of those years had been spent tending bar. But damn it, some things weren’t meant for discussion. Her overactive man-jitters being one of them.

Crouching to snag a fresh bottle of vodka beneath the counter, she peeked behind her. Lips guaranteed to make a girl forget her name curled into a sly smile. Busted. She spun away too fast and scraped her forehead against the rough edge of the bar. “Sonof a fucking, no good piece of shit.”

Head down, she counted to three and fought the need to check for witnesses, thankful the music was loud enough to cover her curse. The graceless gawker routine wasn’t normally her deal, but for the last thirty minutes she’d come up woefully short in the finesse department—and it was all the dark-haired man’s fault.

New bottle ready for action, she faced two middle-aged men dressed like frat boys and settled into her pour-and-bill groove. The routine was a comfort, a stabilizing rhythm to counterbalance the ever-present gaze heavy on her back.

“Hey, Lex.” Jerry smacked her shoulder and motioned behind him, never breaking stride as he headed for the register. “Tall, dark and handsome wants to see you.”

She wouldn’t look. Not again. The giggling trio of barely legal blondes fighting their way into ordering range wasn’t nearly as nice on the eyes, but at least they kept her anchored. “Since when did you take up matchmaking?”

“Since the guy offered me a Benjamin to make sure it was you who took care of him.” What? She spun. The stranger met her surprised stare head on, his smirk a potent mix of humble and confident. “Sold me down the river, did you?”

“Damn right.” Jerry winked, shoved a stack of wrinkled bills into the register, and swaggered toward the waiting blondes without so much as a wish for good luck.

Lexi huffed and took an order from the none-too-shabby twenty-something guy right in front of her on principle. Mystery man could cool his jets for a minute or two. Besides, if his banter matched his looks, she’d need every second she could get to batten down the hatches.

She filled orders with slow deliberation and an extra bit of bravado, grabbing snippets of recon where she could.

A vicious looking man sat next to her dark-haired hunk. Lazy raven waves fell to a hard jawline, a tightly trimmed goatee making his harsh face a downright menace. Entirely the wrong selection for wingman material.

Out of customers and bar space, she faced both men and wiped down of the counter. “What can I get you?” The catchall phrase came out shakier than she wanted, and tried to cover it with an intensive, yet completely unnecessary study of the bottles stocked below the counter.

“You disliked my tactic.” God help her, the man had a voice to match his face. An easy glide that left a slow burn in its wake. Kind of like fifty-year-old Scotch. “I admit it’s not my style, but I was desperate.”

Not exactly the approach she’d expected from a hottie, but it did help ease her tension. “There’s not a thing desperate about you and we both know it.”

He answered with a megawatt smile that damn near knocked her off her feet. Utterly relaxed, he rested muscled forearms on the bar and raised an eyebrow. “Have dinner with me.”

She shouldn’t be able to hear him in such a crush, let alone register a physical impact, but damned if she wasn’t processing both loud and clear. “I don’t even know you.”

He offered his hand. Long, strong fingers stretched out, showing calluses along his palm. “Eryx Shantos.”

Wingman stared straight ahead, his aqua eyes cold enough to freeze a soul.

“Lexi Merrill.” As their palms met, a rush fired up her arm and down her spine, and she shook as though she’d cozied up to a blow dryer in a bathtub. She ripped her hand away and rubbed the tingling center up and down her jean-clad hip.

Eryx didn’t so much as blink, his sword-colored gaze glinting with dare and determination.

Maybe fatigue was taking a toll on her imagination. Or the flu. Or a desperate need to get laid. Gripping the bar for support, she took an order from a cute little brunette trying to avoid a middle-aged, bald guy’s come-on.

Except for a slow pull off his beer, Wingman stayed stock-still. His angry expression screamed, “Stay the fuck back.”

“I work then too.” A lame excuse, but true. Two jobs and part-time college didn’t leave a lot of room for being social. Not that socializing ever managed to work in her favor.

A half-hearted laugh slipped out before she could stop it. “You’re persistent, I’ll give you that.”

“You have nooo idea.” Wingman tipped his longneck for another drink, fingers loose around the dark glass despite his tight voice.

Eryx shot him a nasty glare.

“Your friend doesn’t talk much.” Lexi grabbed a few empties and dunked them in a tub of soapy water.

“His name’s Ludan. And he may not be able to talk at all by the time the night’s over. Depends on if he manages to keep his tongue intact.”

“Yo! Need a few Bud Lights.” Two college-age men in need of a manners class shoved their way to Ludan’s free side.

Ludan straightened and pushed the men back a handful of steps with nothing more than a glare.

No way was she dealing with the fallout from a brawl, even if the young punks could use the lesson. “Stand down and kill the scary badass routine.”

Ludan faced her, his eyes a shade closer to white than blue. It took a tense breath or two, but the muscles beneath his black t-shirt relaxed and he smirked. He eased down on his barstool and snagged his beer. “Your woman’s got bite, Eryx.”

She snatched a pair of Buds from the cooler and popped the tops off. “I’m not his woman.” 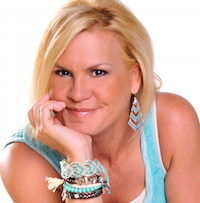 Yes, her life rocks—two beautiful little girls, a great husband, a steady job, and the kind of friends that would take you out back if you hurt her. But, like most women, she’s got obligations stacked tight from dusk to dawn. So, when the world gets her down, she slips into something…less realistic.

Romance is a must. So is a steamy romp (or four). Nothing thrills her more than the fantasy of new, exciting worlds, strong, intuitive men, and the sigh of, “Oh if only that could happen to me.”

So, if you’re picking up one of her books, expect portals into alternate realms and men who’ll fight to keep the women they want. Romantic escape for the women who need it. 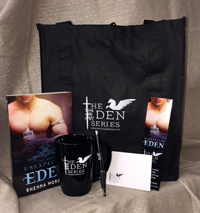