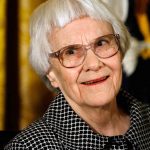 Arguably one of the best known American authors, Harper Lee wrote only one book – To Kill a Mockingbird. Readers anxiously awaited more from this author who viewed wrongs in a world through a child’s eyes. Today, HarperCollins has announced they will be publishing the second book by the quiet, southern author.

The book titled, Go Set a Watchman was penned before To Kill a Mockingbird, but was shelved when an editor ask Lee to change the point of view. Lee said in a statement about the new book:

“In the mid-1950s, I completed a novel called ‘Go Set a Watchman. It features the character known as Scout as an adult woman, and I thought it a pretty decent effort. My editor, who was taken by the flashbacks to Scout’s childhood, persuaded me to write a novel (what became ‘To Kill a Mockingbird’) from the point of view of the young Scout.

“I was a first-time writer, so I did as I was told. I hadn’t realized it (the original book) had survived, so was surprised and delighted when my dear friend and lawyer Tonja Carter discovered it. After much thought and hesitation, I shared it with a handful of people I trust and was pleased to hear that they considered it worthy of publication. I am humbled and amazed that this will now be published after all these years.”

Here is a synopsis of Go Set a Watchman:
“Scout (Jean Louise Finch) has returned to Maycomb from New York to visit her father, Atticus. She is forced to grapple with issues both personal and political as she tries to understand her father’s attitude toward society, and her own feelings about the place where she was born and spent her childhood.”